“[Hill] was like, ‘That was f—ing with my rhythm. I couldn’t perform with that guy.”

While speaking with Vanity Fair in honor of the 2007 comedy’s 15th anniversary, Hill along with several members of the cast and crew, opened up about the casting of Fogell, aka McLovin, the role of which ultimately went to Mintz-Plasse.

However, the group revealed that Hill “immediately hated” Mintz-Plasse after the two auditioned together.

“My buddies, who I was in a drama class with when I was in my senior year of high school, heard of an open audition for this movie. We all auditioned. I was the only one who got a callback, which was a little weird,” Mintz-Plasse said. “And I went in a second time and read with Greg the director, and then got a third callback and read with Jonah and [Michael Cera]”

Hill said that Mintz-Plasse “was really, really amazing off the bat,” but admitted, “I think he was really annoying to me at that time.”

However, producer Judd Apatow shared more specific details from Mintz-Plasse’s audition with Hill, saying, “He was very caustic and attacked Jonah and did improvs insulting Jonah.”

Director Greg Mottola added, “He played it like he was clearly the coolest guy in the room and everyone else was a nerd and a loser. He was Dean Martin instead of Jerry Lewis.” 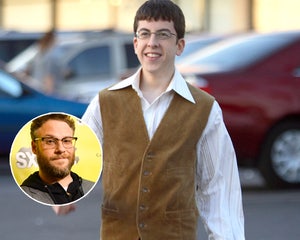 Seth Rogen — who co-wrote “Superbad” and starred as Officer Michaels — recalled what he remembers of Hill’s reaction to Mintz-Plasse’s audition, saying, “Jonah immediately hated him. He was like, ‘That was f— ing with my rhythm. I couldn’t perform with that guy.”

According to Apatow, Hill voiced dislike of Mintz-Plasse and expressed how he didn’t want him to get cast. “Jonah said, ‘I do n’t like that guy. I do n’t want him doing it,” Apatow said, before sharing his response. “And I said, ‘That’s exactly why we’re hiring him. It couldn’t be more perfect. The fact that it bothers you is exactly what we want.'”

Meanwhile, looking back, Mintz-Plasse said he didn’t think he was going to get cast.

“I was just, like, a scrawny kid,” he explained. “I was super stoked to be there. I had Seth and everyone sign my script because I didn’t think I was going to get the part.”

Of course, the role of Fogell aka McLovin went to Mintz-Plasse — and the rest was history. Chicka chicka yeah! 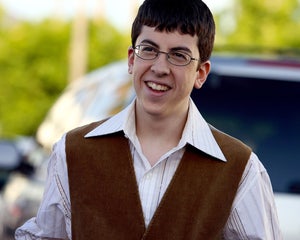 “Superbad” was released in 2007 and would go on to become a huge critical and commercial hit. The coming-of-age tale followed the story of two teenagers — Seth (Hill) and Evan (Michael Cera) — who want to party and lose their virginities before they graduate high school and go their separate ways. In addition to Hill, Cera and Mintz-Plasse, “Superbad” also starred Emma Stone and Bill Hader, who played a police officer alongside Rogen.

Although the movie was a success and is still beloved today, a sequel was never developed, however, Apatow revealed earlier this year that he was very into the idea of ​​a sequel.

While appearing on the “Inside of You With Michael Rosenbaum” podcast, the producer said, per variety, “I always wanted them to do a sequel to ‘Superbad.’ I know that Jonah [Hill] said, ‘Oh it’ll be funny to do it when we’re 70 or 80,’ but I really wanted them to do a ‘Superbad’ in college where Jonah flunks out of college and just shows up and visits Michael Cera at college “

“Everyone was like, ‘Nah we don’t want to screw up ‘Superbad’ by accidentally making a crappy second one,” Apatow later added. “And I would always say the same thing, ‘Well, that’s like saying don’t make the second episode of the ‘The Sopranos.’ Like, so why do you think we would screw up the second one?'”

In celebration of “Superbad’s” 15th anniversary, see the cast then and now in the gallery, below!