“When it rains, it pours on your old pal Bean,” said the actress, who will depart the show on July 31 and be replaced by Lea Michele in early September.

Beanie Feldstein has revealed that she’ll miss a few “Funny Girl” performances due to illness.

On Friday, the actress took to Instagram to announce that she has tonsillitis and won’t be taking the stage as Fanny Brice this weekend.

In an Instagram video, Feldstein, 29, first seemed to allude to the news and online commentary regarding her early departure from “Funny Girl” and Lea Michele being named as her replacement.

“Hey everybody, I’m just checking in. What have I missed? What’s been going on?” she began in the clip, before sharing that she has tonsillitis. “I just got back from the ear, nose and throat doctor, who told me that I have tonsillitis, which is extremely contagious. And she cannot allow me to go back onstage through the weekend until I have enough antibiotics in my system to not be contagious anymore.

Feldstein added, “The last thing I would want on this earth is to get the people that I love sick, and I just am not allowed to go onstage through the weekend. I cannot wait to do my last two weeks, and, you just gotta laugh at a certain point. When it rains, it pours on your old pal Bean.”

According to the Broadway musical’s website, there are two performances on Saturday and one on Sunday. The revival has no showings on Monday, but there is one on Tuesday.

This marks the second time Feldstein was forced to miss shows because of illness. In June, she had to opt out of several performances after contracting Covid-19. Her standby, Julie Benko, performed in her place.

The “Funny Girl” revival and Feldstein were met with mixed reviews when the show debuted back in April. Feldstein failed to receive a Tony nomination for her performance, and the musical itself only received one nom.

Meanwhile, the news of her tonsillitis diagnosis comes just a few days after Feldstein announced on Instagram that she’ll depart “Funny Girl” earlier than expected. The “Lady Bird” actress was originally set to star in the show until September 25. 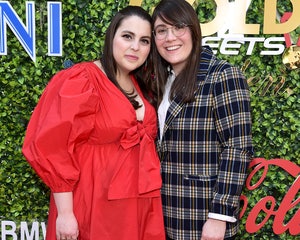 In her post, Feldstein said she’ll be leaving “Funny Girl” at the end of the month, and shared that playing Fanny Brice on Broadway “has been a lifelong dream of mine, and doing so for the last few months has been a great joy and true honor.”

“Once the production decided to take the show in a different direction, I made the extremely difficult decision to step away sooner than anticipated,” she added. “I will never forget this experience and from the bottom of my heart, I want to thank every single person who came to the August Wilson for the love and support you have shown me and our amazing cast and crew.”

The “Booksmart” star praised her co-workers and urged fans to “continue to join them on Henry Street after I depart.”

Feldstein’s last performance will be on July 31, before Benko steps in until Michele takes over in September.

After Michele was announced as Feldstein’s replacement, the “Glee” alum expressed her excitement in an Instagram post.

“A dream come true is an understatement,” she wrote on Monday. “I’m so incredibly honored to join this amazing cast and production and return to the stage playing Fanny Brice on Broadway. See you September 6th.”

Meanwhile, Michelle’s former “Glee” co-star Jane Lynch had also been starring alongside Feldstein in the revival as Mrs. Brice, Fanny’s mother — but don’t expect a “Glee” reunion between her and Michele.

While Lynch will stay onboard a little longer than Feldstein — appearing through September 4 — it was also revealed Monday that Tovah Feldshuh will take over the role starting on Lea’s first night.

Like Feldstein, Lynch was originally set to star in “Funny Girl” until September 25. Click here to see what Lynch had to say about leaving the show before Michele joins.

Click to rate this post!
[Total: 0 Average: 0]
Related Posts
Roger Daltrey ‘disappointed’ by lack of progress after Brexit: ‘We haven’t made the most of it’
30A businessman Michael V. Jordan stars in two movies
EUPHORIA STAR HUNTER SCHAFER JOINS THE “HUNGER GAMES” STAFF
Leave a Comment