Season 4 of Stranger Things takes the supernatural Netflix mega-hit to a new level. For the first time, several storylines take place outside of Hawkins, Indiana, the fictional Midwestern town where Eleven and the gang fight off bigger and bigger monsters each season.

When the latest season starts, six months after the Battle of Starcourt Mall, the beloved characters are now separated, with Eleven and the Byers family having relocated to sunny California, and Hopper trapped halfway around the world.

For these new settings, the show goes international, with filming taking place in Eastern Europe and the southwestern United States, while also sticking to its traditional locations in the Atlanta metro area. Below, our rundown of the many places where Season 4 was filmed.

As most fans know by now, Hopper actually survived the explosion in the underground lab in the Season 3 finale. The Season 4 trailer (seen above) sees him trapped in a snowy Russian prison. For the wintry landscape, the show filmed in Vilnius, Lithuania, at the recently vacated Lukiskes Prison during winter 2020.

Built in 1902 under Czar Nicholas II of Russia, the prison held its last inmates in 2019 and has been remade into a cultural site featuring daily tours and a dance club inside its former Catholic Church.

New Mexico stood in for the Byers’ new California town.

After wrapping in Lithuania, the production moved to the Atlanta metro area, where most of Seasons 1 to 3 were filmed. Unfortunately, they were able to film for only two weeks before all Netflix shows shut down in the beginning of the pandemic. Once filming restarted, it partly took place at the streaming giant’s facilities in Albuquerque, New Mexico.

Several of the settings in the fictional town of Lenora Hills, California, where Eleven and the Byers family have relocated, are actually landmarks in Albuquerque. Scenes at their new high school were filmed at Eldorado High School, and roller skating scenes were captured at the rink Roller King. Filming also took place in the nearby town of Los Lunas and other surrounding areas. 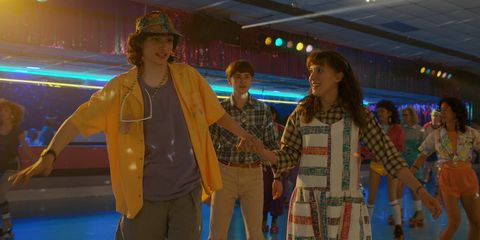 The Hawkins scenes were still filmed in Atlanta.

The show has used the city of Atlanta and surrounding towns as stand-ins for Hawkins since Season 1, which were mostly filmed at EUE/Screen Gems Studios. Though Hawkins is a fictional town, many of its street and neighborhood names are based on real places. The Duffer brothers based on the names on their memories from growing up in Durham, North Carolina.