If you’ve kept up with Westworld—HBO’s Emmy-winning, dystopian, sci-fi thriller—for all four of its seasons, then your head might be spinning while deciphering the drama’s barrage of plot twists. Main characters like this season’s Christina (Evan Rachel Wood), Charlotte Hale (Tessa Thompson), Maeve Millay (Thandiwe Newton), and Caleb Nichols (Aaron Paul), find themselves on a never-ending loop across time, traversing fantasy realms inspired by the old West, the 1920s, and even futuristic elements. It makes sense, then, that the show’s whirlwind feel is closely familiar for costume designer Debra Beebe, who leads the costuming for season 4.

The wardrobe vet has more than 30 years of experience in the business, including an education in theater design, previous work on TV drama Homeland, and decades of supervision experience—though she says she’s never quite worked on a project of this magnitude. “My supervising and management background definitely helped, as it’s a monster of a show: as big as you always hear it is,” Beebe says during a recent Zoom interview with W.

Fortunately, designing bespoke looks is an area she’s “very comfortable in.” And when it comes to a production of Westworld’s scale, Beebe explains that tried-and-true styling methods still hold weight—calling for tons of research and just as much wardrobe shopping. “You do look everywhere and you want to find [pieces] that haven’t been out there before, that are new and fresh,” she says. “That’s how I like to work.” Below, Beebe breaks down the style of four of the show’s main characters, including Hale—and that belted black number the costume designer keeps getting DMs about. 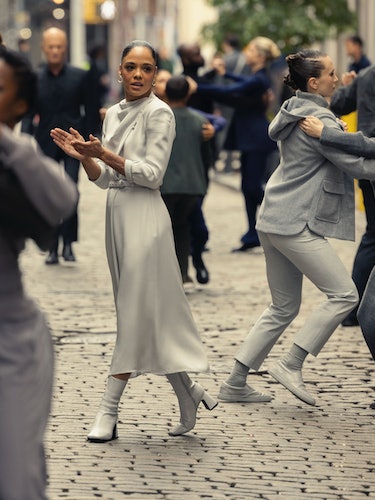 A symbol of power this season—and the often divisive, mental taxation that comes with it—Charlotte Hale brings her steeliness into her sartorial sensibility. “She’s running the show and she knows it,” says Beebe, noting that Hale’s silhouettes are strong, powerful, and feminine. “She’s still fighting against other entities but…it’s kind of a game for her, this world that she’s created, so she’s having fun with it. I went less corporate than she has been in past seasons, because that’s not where she’s at,” Beebe explains.

To evoke a “god or goddess”-inspired aesthetic, Hale donned costumes like a custom red, one-shoulder jumpsuit, a pale gray Armani gown—her look of choice whilst controlling humans’ movements, unbeknownst to them, in the streets of New York—and a fan-favorite, fitted black jumpsuit cinched with an Alexander McQueen belt. “The black jumpsuit with the stripes underneath is just a really strong outfit,” says Beebe. “I’ve gotten several messages from fans asking about that…and [Tessa] wore it so well.”

If Hale is stepping out of the boardroom this season, then allow the mysterious (but-not-so) Christina to step into it with her wardrobe choices. Clearly a callback to the notorious protagonist Dolores Abernathy, we meet Christina in a modern world far removed from Dolores’s farm life. “She’s contemporary, in this apartment, has a roommate…and so she’s fitting in, her world is a little more corporate-professional,” explains Beebe.

Clean and minimal lines throughout her ensembles—such as the custom, laser-cut top and two-level skirt for her date with Teddy Flood (James Marsden)—help reflect Christina’s assimilation as a New York City professional. Meanwhile, thoughtful and minimal color usage definitively nods to Dolores. “We really saw her mostly in the cornflower blue in the west [in past seasons],” Beebe says. “We went a little darker for this new world with her, darker blues,” namely navy and teal, like the signature coat she’s wearing atop a “slashed” Chiara Boni dress. “One of the creators just loved those cut-out moments in her clothing,” Beebe explains. “She thought it felt more futuristic and edgy while still clean.”

Maeve isn’t going down without a fight, quite literally—and her costumes this season reflect her preparedness for combat. While Maeve has glamorous moments like her bedazzled 1920s attire—an outfit, Beebe explains, that was created prior to her joining production (though she costumed other cast members for this era)—for much of her time she was dressed for “taking out the bad guys,” Beebe says. “She was really looking like the badass that she is,” she says with a laugh.

One prominent example is the look Maeve wears to battle Charlotte, an all-black number in stark juxtaposition to Charlotte’s sleek red jumpsuit.

Maeve’s costume, meant to be “ninja-like or maybe a little ode to The Matrix,” features a sturdy black coat as the centerpiece, which was then altered for an exaggerated feel. “We actually purchased the coat and then I added details to it: across the back and on the cuffs, lifting the collar,” says Beebe. “Her outfits reflected that she was going in swinging…she’s still in attack mode.”

Understated yet of equal importance this season is Caleb, whom Beebe notes is essentially “sidekicks” with Maeve. Like his combat-ready counterpart, Caleb often dons a more “informal” look, most prominently his “test subject” garbs, which we see him wearing throughout his many rounds of experimentation in the lab. “We’re many, many years in the future. So, simple clean lines…blended in really well with the work that production design did,” explains Beebe of his uniform. 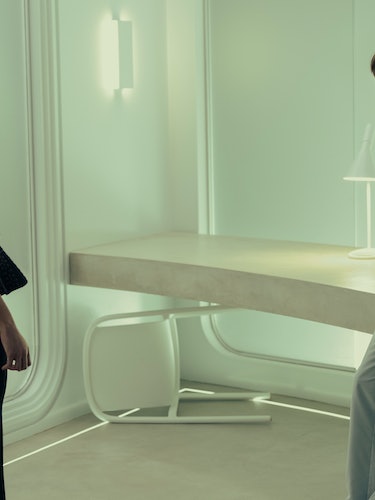 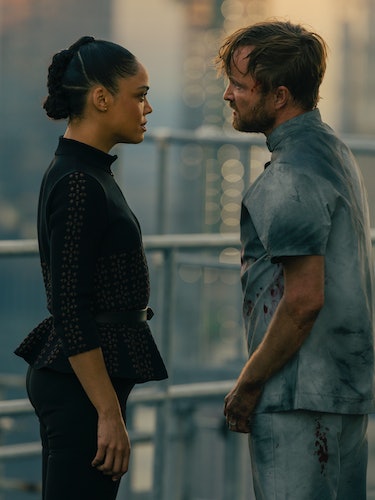 “We had to have multiples of that for all the different elements of him trying to escape, going through fire and smoke, falling, running across himself in previous incarnations, and [then] adding blood to it,” she adds. “I don’t know how many we had for him, probably, like, 20. So I think it all tracked really well, that escaping journey he went on.”