There are few things more humbling than the passage of time. Our hair begins graying, our youth starts to feel fleeting, and suddenly kids born after the year 2000 can legally purchase alcohol. Usually, my answer to the question “Wanna feel old?” is “Get away from me.” However, I cannot look away from this photograph, a relic from 2007 that is both nostalgic and discomforting:

That is a picture of Cindy Crawford, her children, and Vanessa Anne Hudgens — I refuse to omit the “Anne” — on the red carpet for High School Musical 2. Hudgens is shaking hands with Crawford’s 5-year-old daughter Kaia Gerber. You likely know Gerber, now 20, from her work as a model, actress, or cutting her dad’s hair. Aw, so cute! Or is it? Let us take a brief detour to discuss the dating history of Ms. Vanessa Anne Hudgens.

Hudgens famously dated her HSM co-star Zac Efron throughout their time filming the franchise. They eventually broke up in 2010. The next year, she started dating Austin Butler. You either know Butler from his role as Elvis in the new Baz Luhrmann–directed biopic or his continued Performance as Elvis on the movie’s press tour — the man is holding onto that Elvis accent for dear life. I recognize Butler from his role as James Garrett on Zoey 101, the 2005 Nickelodeon show that starred Jamie Lynn Spears and has nothing to do with this but is always worth mentioning. Anyway, Hudgens and Butler dated for nine years, creating such classic hits as being investigated for carving their names into a rock at an Arizona national park. At the beginning of 2020, they announced their breakup. Don’t worry, Hudgens has moved on and is currently dating baseball player Cole Tucker. (They met during a meditation class on Zoom. Namaste.)

Butler, now 30, has since moved on as well and is currently dating … Kaia Gerber. Yes, the same Kaia Gerber from earlier!! Gerber and Butler were first linked in December 2021. They’ve done yoga together and attended the 2022 Met Gala as a couple, two major milestones in every relationship. (Gerber previously dated Euphoria star Jacob Elordi. At one time, Elordi was rumored to be dating Lori Loughlin’s daughter Olivia Jade, who looks like Kaia Gerber in a different font.) Now, let’s take another look at that HSM2 red carpet photo. 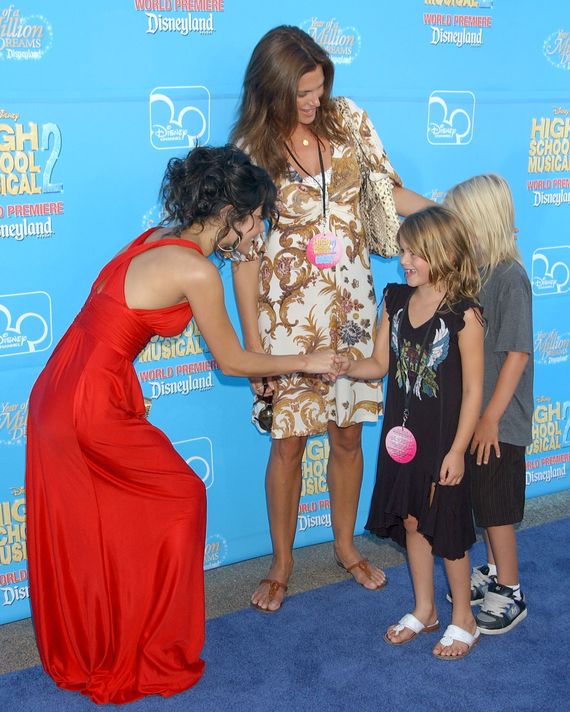 That is a picture of Vanessa Anne Hudgens shaking the hand of her future ex-boyfriend’s new girlfriend. Its existence is either Kismet or a curse, I haven’t decided quite yet. I am also still unsure why Cindy Crawford and her family were at the HSM2 premiere to begin with. Maybe it’s because she was in an episode of Disney Channel’s Wizards of Waverly Place? (She played a model who also liked board games — brave!) Regardless, this seems like an apropos time to mention that Butler was also on an episode of wizards and has a role in the High School Musical universe He co-starred in the Ashley Tisdale–led spinoff Sharpay’s Fabulous Adventure. Based on what I gather from the on-set photos, he played … a pervert that followed Sharpay around with a big camera? It’s a small world, etc.

you could tell me this is from a parent teacher conference and id believe you but its actually aaron taylor johnson and his wife pic.twitter.com/jkzSbfk2ps

To address the obvious, there is a 13-year age gap between Hudgens and Gerber and a 10-year age gap between Gerber and Butler. Butler and Gerber’s age difference, while unsettling in a photo from 2007, isn’t atypical of Hollywood couples. It certainly doesn’t raise eyebrows like the 24-year age gap between Aaron Taylor-Johnson and Sam Taylor-Johnsonwho started dating when he was 18 and she was 42. Or the 27-year age difference between Dane Cook50, and his new fiancée, Kelsi Taylor, 23. The two have been dating for five years, and Cook has been adamant about specifying that timeline since Taylor would have recently turned 18 when they first got together. However, there is some skepticism about how old Taylor really was when the two started dating since they appear to have been hanging out when she was still a minor. Writer Tracie Egan Morrissey has done the lord’s work, chronicling a deep dive into Cook’s Instagram and bringing to light the “game nights” Cook often hosted. Based on Cook’s own Instagram posts, Taylor is far from the only teen to have attended a party at this adult man’s house. Of course, Cook and Taylor are committed to appearing unbothered by questions about their age gap. Cook, who I regret to inform you is on TikTok, recently shared a throwback photo of himself from 1994. He’s either 21 or 22 in the photo, around the same age his fiancée is now in the year 2022. Cool.

But back to Vanessa, Kaia, Austin, and the impermanence of youth. If you actually want to feel old, I recommend gazing upon this photo of Austin Butler days before his 19th birthday — nearly the same age Kaia Gerber is now — holding an SD card for a flip phone. Or this picture of Butler and Hudgens from 2012, when Uggs and layering hoodies under leather jackets were peak fashion. These pictures make me feel ancient in a way a multigenerational handshake never could.

Click to rate this post!
[Total: 0 Average: 0]
Related Posts
10 Winter Season 2022 Bag Trends
Lodge The place Stephen ‘tWitch’ Boss Died Not Renting Rooms in Aftermath
All the things Jeff Bridges Has Stated About His Well being Battle
Leave a Comment