The best entertainment of 2020, as by Vulture’s chosen critics. Click here to see selections for every subject and more.

Pleasure is an important form of knowledge, and in art, pleasure comes from the bodily confirmation of seeing things in the flesh. That form of knowledge slipped away early this year. In our diminished physical spaces of quarantine, we could no longer take part in that ancient discourse of pleasure, and a pensive somnambulance set in. Then, in late May, the pressure of the pandemic was forcibly mixed with things that have lingered in the American night since our founding — and they exploded. The George Floyd protests initiated the next stage: Everyone went out again, all at the same time. We rediscovered one another. And something else too: the bodily confirmation of the town square, where activism could become a form of creativity.

This year reconfigured everything. Experiencing art in galleries and museums, being together, has taken on a new urgency, with added density and intensity. Nothing is neutral here. We’re now hyperaware that art lives in mutinous, contested space.

Our simplified daily lives, spent alone or in small groups, have mushroomed into a supercharged collective consciousness — one that will make our eventual return to communal space different. And, I think, better. 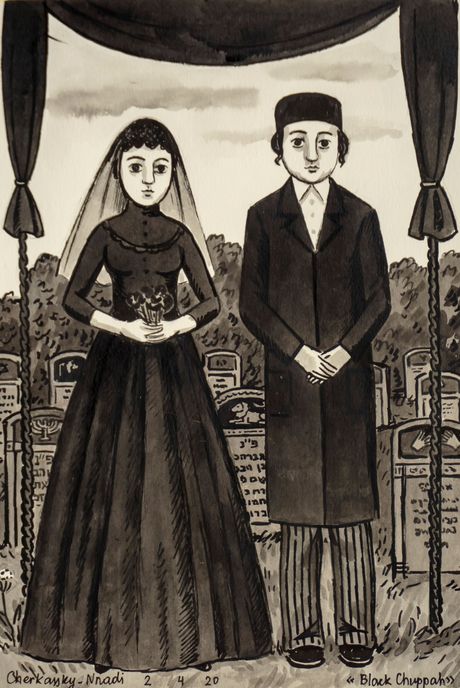 Online exhibitions got a lot of art lovers through this year. The best example I saw was organized by Alison M. Gingeras, one of the sharpest, most independent curators and critics out there. It was an exhibition of Kyiv-born, Tel Aviv–based Cherkassky’s paintings of old-world Jews and Russians, punk kids, and scenes that conjure a high-tech interconnected shtetl. Mazel tov and l’chaim. 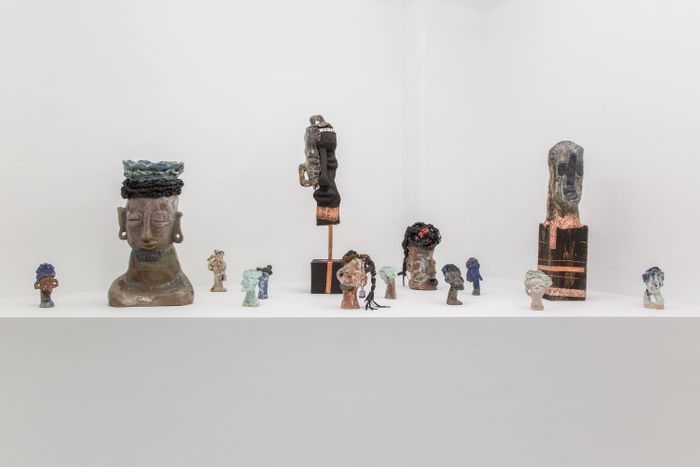 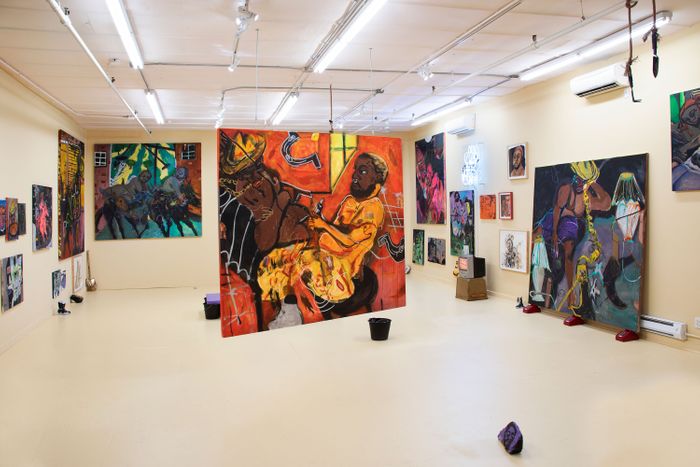 This incredible book is a mad descent into the Museum of Modern Art’s archive — obsession become form. Elligott, MoMA’s chief of archives, library, and research collections, and the visionary publisher and folk artist Lippy present the museum’s wild history through facsimiles of all but lost documents, pictures, memos, notes, images, reviews, and secret messages. A new scriptorium of art. 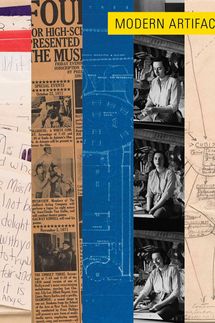 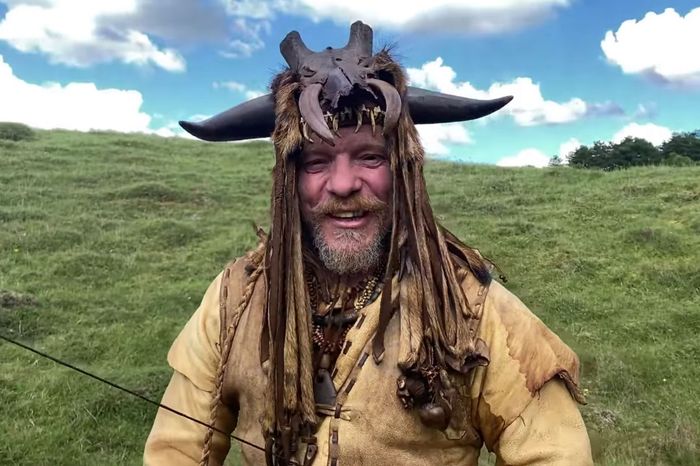 This brilliant resident of East Anglia posts videos to Instagram and YouTube of himself wearing his own hand-hewn buckskins and bone-and-stone jewelry while making prehistoric-style artifacts — for example, flint axes carved from stone that Lord gathered himself. If I were a Netflix producer, I’d sign him for a series. 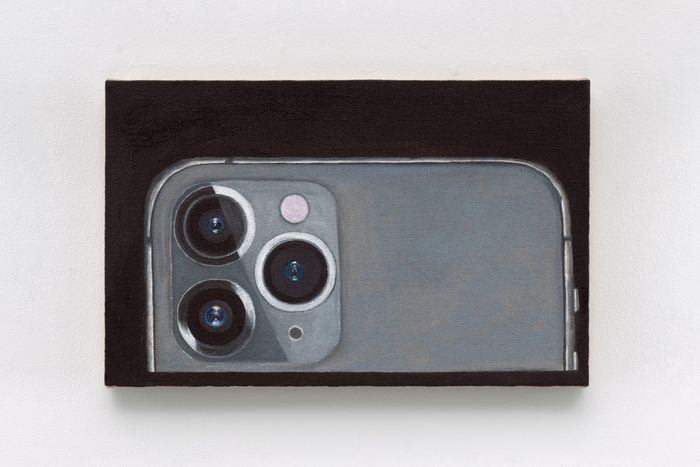 This exhibition let me know what the universe would look like through a third eye. Churchman’s abstract and realistic citron-and-curry-colored paintings of pictures from books, the imagination, the internet, street scenes, and logos were like a walk-in encyclopedia allowing us to contact other worlds. 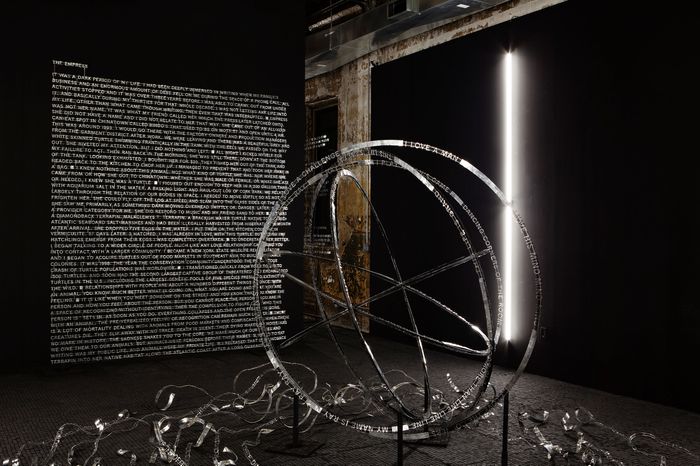 Berger’s mystical installation swept me off my feet: a series of large nickel-wire scaffolds covered in thousands of one-inch-tall handcrafted letters spelling out visionary texts appropriated from artists, religious figures, designers, activists, and others. The effect was a temple of rhapsodic wisdom and pulsing process. Sculptural poetry from a maker who deserves a MacArthur. 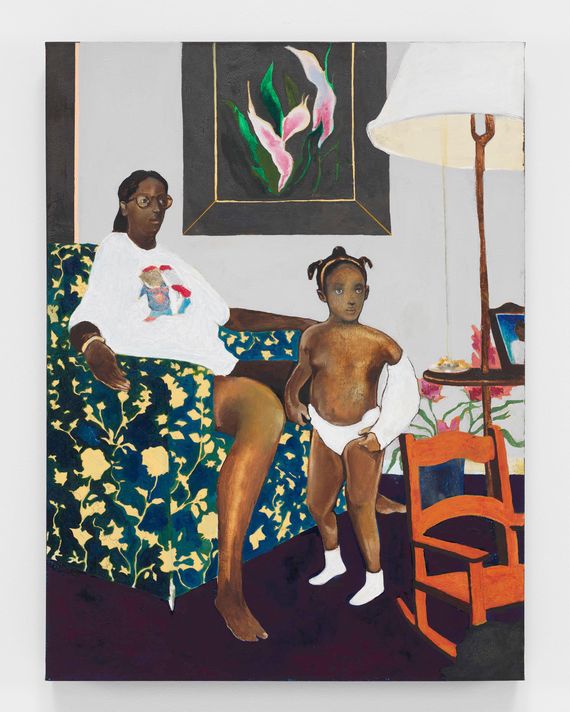 Noah Davis, Single Mother with Father Out of the Picture.
Photo: Courtesy of The Estate of Noah Davis and David Zwirner. Photo: Kerry McFate

A thrilling discovery and a terrible loss. In this show organized by curator Helen Molesworth, Davis — who died in 2015 at age 32 — was revealed as a Degas-like painter of hushed intimacy. His images of people in parks, kitchens, and under the stars are clouded in secondary tones and washes that bring his work to ghostly eternal life. 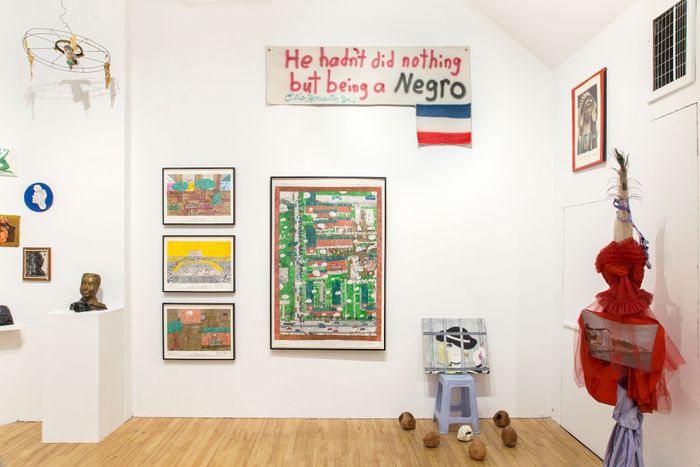 This revelatory group show, curated by Sam Gordon, featured drawings, diagrams, paintings, sculptures, and altered found objects by mostly self-taught contemporary Black artists, all of them situated in a lineage shaped by the Great Migration. Gorgeous works of delight, life, and dilapidation. 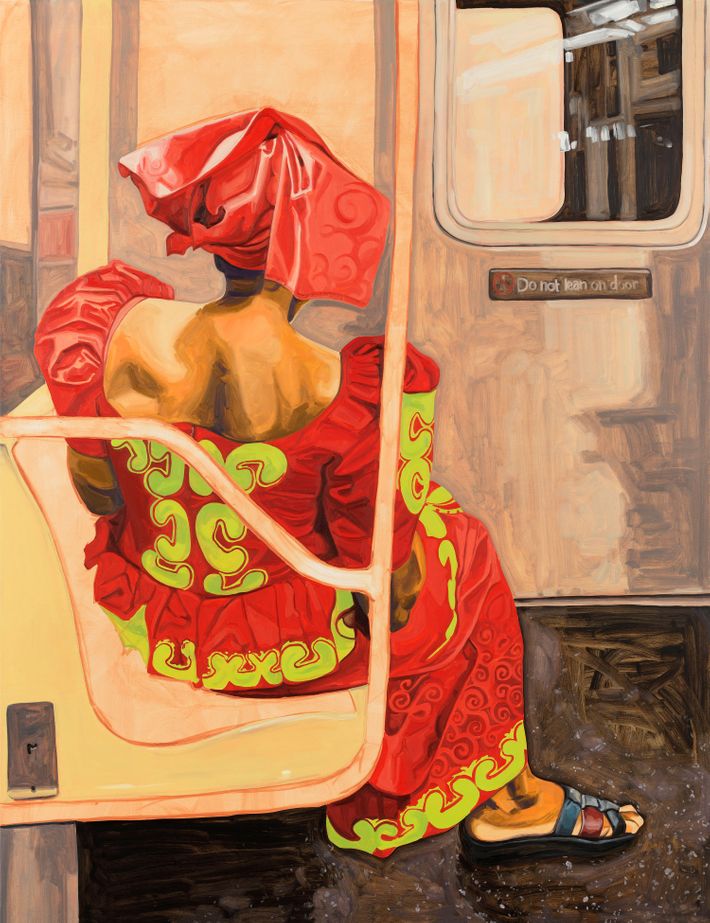 This outstanding survey confirmed the 31-year-old Casteel as a major talent. A painter of modern life, she depicts mostly Black figures posed on building steps, at home, or elsewhere. This is a new level of charged and alive American social portraiture, one that doesn’t overfreight its subjects with struggle. Casteel’s paintings blaze in resinous, sensuous color. 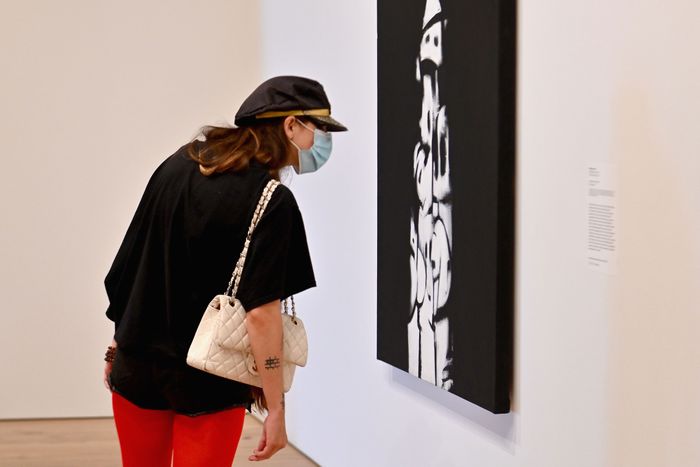 Galleries are my way of knowing the world. Seeing art in the flesh sustains me. Before the pandemic, I’d been seeing 25 shows a week, every week, since 1982. As with much else, the coronavirus stopped galleries in their tracks. Except for the profiteering auction houses and the multinational megagalleries that deplete the rest of the system of financial and critical oxygen, the art world held its breath. Many feared galleries could suffer a mass-extinction event.

Some did die — including one of the best, Gavin Brown’s Enterprise, whose proprietor shut down his own space to partner with Gladstone Gallery. Yet in September, when galleries began to open again in limited ways, it was clear that many had survived by doing just enough business online. (The fact that they didn’t have to shell out hundreds of thousands of dollars every month for art fairs helped too; ditto all the other travel and dinner expenses.) Returning to the galleries has been joyous. Masked visitors peer at the work through fogged glasses, and everyone beams, ecstatic to feel the collective buzz again and exchange bits of muffled conversation about this show, other shows, gossip, and art in general. These shared moments reassure us that New York’s high number and density of -contemporary-art galleries make it not just the trading floor for the art world but an artistic Garden of Eden. Long may the galleries thrive.

*A version of this article appears in the December 7, 2020, issue of new York Magazine. Subscribe Now!