Liberal Justice Elena Kagan was joined by conservative justices Samuel Alito, Clarence Thomas and Neil Gorsuch, who would have denied the request.

The Supreme Court order is a loss for Texas. The state argued that its law, HB 20, which prohibits large social media firms from blocking, banning or demoting posts or accounts, does not violate the First Amendment.

The majority did not explain its thinking and Kagan did not lay out her own reasoning for her vote to allow the law to remain in place.

But Alito, writing for himself, Thomas and Gorsuch, was critical of the majority’s decision. He said the case raises questions of “great importance” concerning a “ground-breaking” Texas law that addresses “the power of dominant social media corporations to shape public discussion of the important issues of the day.” He stressed that he had not formed a “definitive view” on the novel legal questions that arise from the law, but that he would not have stepped in to block the law “at this point in the proceedings.”

“Texas should not be required to seek preclearance from the federal courts before its laws go into effect,” Alito wrote.

Opponents of HB 20, including the tech industry, argued that the legislation infringes on the constitutional rights of tech platforms to make editorial decisions and to be free from government-compelled speech.

The state argued that HB 20 does not violate the First Amendment because the law seeks to regulate tech platforms’ conduct toward their users, not the companies’ speech, and that it seeks to designate them as “common carriers” akin to railroads and phone companies .

The wider case is viewed as a bellwether for the social media industry and could determine whether tech platforms have to scale back their content moderation in more than just Texas, and to allow a broad range of material that their terms currently prohibit.

The Computer and Communications Industry Association, one of the groups behind the emergency petition, said the decision upholds more than 200 years of free-speech principles against government infringement on private speech.

“We appreciate the Supreme Court ensuring First Amendment protections, including the right not to be compelled to speak, will be upheld during the legal challenge to Texas’s social media law,” said CCIA President Matt Schruers. “The Supreme Court noting the constitutional risks of this law is important not just for online companies and free speech, but for a key principle for democratic countries.”

Chris Marchese, counsel at NetChoice — another group behind the emergency petition — said the Texas law is a “constitutional trainwreck.”

“We are relieved that the First Amendment, open internet, and the users who rely on it remain protected from Texas’s unconstitutional overreach,” Marchese said.

CNN has reached out to Texas Attorney General Ken Paxton for comment.

In a separate dispute, a different federal appeals court kept on hold most of a similar law out of Florida, creating a circuit split on the issue. Often, the Supreme Court is more likely to wade into a dispute if lower courts are in direct conflict.

The Texas law is being challenged by advocacy groups representing the tech industry. 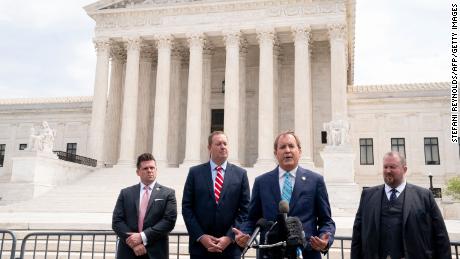 In court papers, the groups called the law “an unprecedented assault on the editorial discretion of private websites.” They warn it “would compel platforms to disseminate all sorts of objectionable viewpoints—such as Russia’s propaganda claiming that its invasion of Ukraine is justified, ISIS propaganda claiming that extremism is war- ranted, neo-Nazi or KKK screeds denying or supporting the Holocaust, and encouraging children to engage in risky or unhealthy behavior like eating disorders.”

In response, Texas Attorney General Ken Paxton had argued that HB 20 does not infringe on tech platforms’ speech rights.

The legal battle attracted “friend of the court” briefs from interested parties including groups such as the Anti-Defamation League and the NAACP who had urged the Court to block the law, arguing it will “transform social media platforms into online repositories of vile, graphic, harmful, hateful, and fraudulent content, of no utility to the individuals who currently engage in those communities.”

A group of states led by Florida also submitted a Court filing defending Texas’s law. The friend-of-the-court brief, which was authored by a dozen states including Alabama, Arizona, Kentucky and South Carolina, among others, reflects how the legal battle over HB 20 has nationwide ramifications.

Click to rate this post!
[Total: 0 Average: 0]
Related Posts
Morgan Wallen Sings at the 2022 Billboard Music Awards After Racial Slur
Xavisus Gayden is All About Military, Muscle, and Music
Best Foundations For Your Wedding
Leave a Comment