“You’re never prepared for these days.”

Simon Cowell is opening up about his grief over the news of “America’s Got Talent” contestant Nolan Neal.

During an interview with People Magazine, Cowell reflected on the tragedy a few weeks after Nolan’s passing. He was only 41-years-old when he died following an ongoing battle with substance abuse.

“Unfortunately, it happens too much over the years,” Cowell said. “I was thinking about this the other day. People [who] passed too soon. Every time it happens, because you’ve gotten to know them, it’s horrible.”

The 62-year-old noted, “At that moment, it’s like, ‘What can I say?’ the unfortunate thing is it’s happened too many times and every time it happens, it’s hard.”

Simon also referenced the death of another AGT competitor Nightbirde in February who was also his Golden Buzzer selection in season 16. “After the last three years, it’s been tough. And then, you think everything’s okay and then something hits you like a story like that and it’s hard,” he admitted.

“But all I can say is, what I’ve learned from this, is that you just take every day as it is and you try and stay positive, you try and stay healthy,” Cowell concluded. “That’s it. I mean, I was talking about this to someone earlier on, you’re never prepared for these days.” 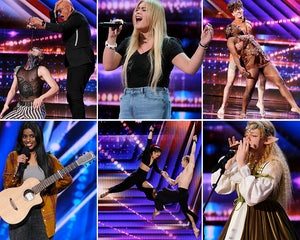 TMZ broke news of Nolan’s death in July, reporting that the singer had been found dead in his apartment in Nashville.

No official cause of death has been determined, but the singer has talked openly about his struggles with substance abuse. During an interview with WBIR in 2020, he admitted that he was still struggling with addiction while he was competing on “The Voice.”

Following the announcement of his passing, Nolan’s daughter Caylin Cate organized a GoFundMe page to cover funeral expenses, writing that her father “did not have any life insurance or any money whatsoever.”

“The expenses that come from this are extensive as we are trying to prepare for his funeral and fly in his son & loved ones,” she continued. “If you want to help in anyway, you can donate here. Anything is appreciated and I am so grateful for the community rallying behind us.”

Click to rate this post!
[Total: 0 Average: 0]
Related Posts
A Love Triangle We Can Get Behind: Emily Ratajkowski, Pete Davidson, and Dionne Warwick
Lizzo’s Hairdresser on The Art and Politics of Child Hair
The city of Lancaster and the Pennsylvania College of Art & Design present Art Alley [photo] | local news
Leave a Comment