After so many Stranger Things episodes centered on Eleven (Millie Bobby Brown), Max (Sadie Sink) finally got to take center stage in season 4. Reeling from the loss of her brother, the flame-haired skater retreats from her friends and cuts things off with her boyfriend, Lucas (Caleb McLaughlin). Her only companion is a Walkman—which has the cassette tape containing Kate Bush’s “Running Up That Hill.” She listens to the song so much that even though she’s kept her friends at bay, they know it’s the one song that could save her life—and, they hope, theirs. (Viewers have also been listening to it on repeat, to the point where, 37 years after its release, it hit No. 1 on the Billboard Global 200 chart several times following the Netflix series’ season 4 premiere.)

Stranger Things—which, as the costumes make clear, takes place in the ’80s—isn’t the only way Sink gets her nostalgia fix. The 20-year-old actor has also been revisiting Seinfeld. Here, she makes the case for her similarity to Max and reflects on her character’s past, present, and future.

What was your reaction to the news that the Duffer Brothers [who cocreated Stranger Things] originally planned for the season to end with Max dying?

I didn’t know until someone told me about the interviews. They never really tell us what’s going to happen until we get the scripts, and when I got the script for episode 9, it said that Max dies but that she sort of comes back. It’s uncertain, but she’s not fully dead. I didn’t know the plan was to completely kill me off, which definitely would’ve been a very impactful ending. They’ve been saying in interviews that Max’s state at the end of season 4 is intentional, crucial, and calculated in terms of how it’s going to come to play in season 5—I guess. I know nothing. 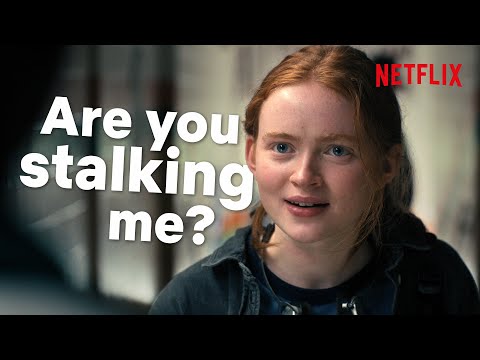 What did you think was going to happen to Max before you read the script?

Season 4 was a wild journey for her. I definitely knew nothing good would happen, but I was not expecting this—this was a crazy, crazy end. I thought either she was going to succeed in a really epic way, or it would be her downfall, and I guess we landed somewhere in the middle.

You had to pause filming the season for more than half a year during lockdown. How much did Max stick with you during that break?

I definitely needed that time because of the state Max is in in season 4. That sense of isolation she feels is something we could all relate to coming out of quarantine, so having a lot of time by myself was good. By the time we returned to season 4, we were all really hungry to get back to work, so there was this determination and excitement on set. It wasn’t as difficult as I thought it would be to get back into the groove of filming after such a long break.

Do you keep in touch with your costars when you aren’t filming?

Yeah, we keep in touch all the time—I was just on FaceTime with Gaten [Matarazzo, who plays Dustin] and Caleb last night. Over quarantine, there would be an occasional text like, “Is everyone okay? I hope we get back to work soon!” After that period of uncertainty, there was an intense appreciation for one another when we reunited on set.

Have you watched this season?

I have. They’d put two episodes at a time in our Netflix accounts a few weeks in advance. [I have] a shared account with my family, so we’d all watch together wherever we were. I especially loved watching the show this year because it was so scattered; I had no idea what they were doing in Russia and in California. It was nice to see all the pieces come together. And some of that stuff was so long ago, you forget what happens.

You constantly listened to Kate Bush’s “Running Up That Hill,” the song that ends up saving Max’s life, when filming this season. Have you listened to it since, or are you sick of it?

I have. I haven’t listened to the radio in a long time, but it was playing when I was in the car the other day. It was some kind of top-hits [station], very modern music, and then “Running Up That Hill” played, sandwiched between TikTok sounds. It was a surreal moment to hear it on the actual radio, so many years since its release.

Max almost always has big headphones on. How much did you feel like you were in your own world on set?

The thing with the headphones is that not every Walkman worked. They had probably a dozen for me, but there wouldn’t always be music playing. And they’re pretty poor quality, so the music was very faint and muddled. I think I broke three or four Walkmans throughout the filming process. I started breaking them so much that they made me a Styrofoam one. It was fake, and it was essential.

Your choice of character for this portfolio was Elaine from Seinfeld. When did you first see the show?

There were a few sitcoms that were always on rotation in our house growing up, so I grew up with Seinfeld. My parents would watch it, and I would kind of sneak into the living room and watch a little bit if they let me. I just recently started revisiting it, so it was fresh on my mind. And with Elaine, the dynamic is so cool. It reminded me of Stranger Things in a way—being the only female character in a group full of male characters, similar to Eleven or Max. And just thinking of her in terms of fashion, because Elaine’s costumes are so underrated.

Do you have a favorite?

She wore this really grandma-y red dress [in season 3, episode 4], with socks and some kind of [oxfords]. She always does really flowy, feminine dresses, then toughens them up with a blazer of some sort. I’ve found that I’m modeling my summer style off of Elaine ever since doing this shoot. I love the blend of traditionally masculine silhouettes with feminine flair.

What about a favorite look that Max wears this season?

There are these dark jeans [she wears] with a green top and this cool corduroy jacket. She first puts it on in episode 6 and then wears it until episode 9. That was my favorite, and I’m glad I liked it because I definitely had to wear it a lot—probably a year in total. I would just show up and put this costume on every single day. There were multiples, like a bloody pair of jeans and a clean pair of jeans. They really had to track the whole story, like Where is she at right now? How dirty and bloody are her clothes?

What do you think is going to happen with Max and Lucas next season?

Poor Max—who knows? She’s definitely not able to make it to the movie date on Friday. A lot is up in the air. But after this whole experience, she’s probably learned a lot about the value of keeping people close in her life. We see a little glimpse of that in episode 9, when she agrees to the movie date. It feels like she’s ready to let people back into her life, heal, and move on from everything. Sadly, that was interrupted. But I would like to see her go further with that and be in a place where she’s fully herself again.

When do you start on season 5?

With it being the final season, I don’t think they’re going to rush it. They want to make it perfect and have the most epic ending to the most epic journey ever. Hopefully it’ll be a shorter turnaround than the season 3 to season 4 gap. I’m really excited to get back to work. I trust Matt and Ross [Duffer] so much, so wherever they want to take my character, I’ll be there.