Release Date, Cast, and Everything Else We Know - Upsmag - Magazine News Skip to content Contents Hide
1 Who is Jenna Ortega, aka Wednesday?
2 Who else is in the fam?
3 What about the rest of the cast of Wednesday?
4 What’s the show actually about?
5 How closely related is it to The Addams Family?

As a revival of the Addams Family franchise, Wednesday has big shoes to fill. Ahead of its fall release, we’re slowly but surely finding out whether or not producer and director Tim Burton is up to the job. The live-action Netflix series allows the titular character (played by Lisa Loring in the 1960s original) to take center stage, meaning lead actress Jenna Ortega is getting her big break. The trailer that dropped on Wednesday, August 17 kicks off at the subversively-named Nancy Reagan High School (there’s even a bust of the late former First Lady in the lobby), where Wednesday is predictably considered a freak (We guess the Adams parents voted for Mondale?). But Wednesday has learned how to stand up for herself over the course of attending eight schools in five years: When a group of bros on the swim team bully her brother, she interrupts one of their practices by dumping a couple dozen piranhas in the pool. It isn’t long before she’s on to school no. 9, where the real action starts. From the cast to what happens next, find out everything we know about about the series so far, here. 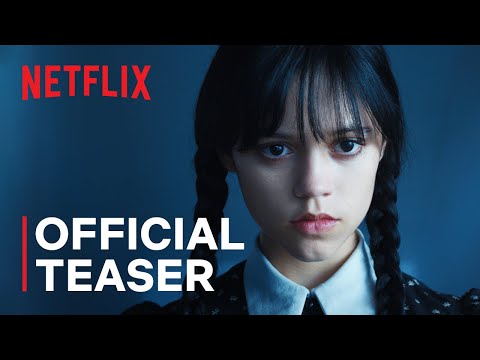 Who is Jenna Ortega, aka Wednesday?

The 19-year-old, who is from Coachella Valley, California, started her acting career at age nine, first booking cameos on shows like CSI: NY and Days of Our Lives. Then came a role as the Vice President Rodriguez’s daughter in Iron Man 3, which eventually led to portraying a young Jane in Jane the Virgin and acting opposite Penn Badgley in season 2 of You. She’s next set to reprise her role as Tara Carpenter in Scream 6 and may also return in season 4 of You after sitting out season 3.

Who else is in the fam?

Namely Catherine Zeta-Jones, who stars as Wednesday’s mom Morticia. (We’re loving seeing her as a goth.) Luis Guzmán will portray her husband, Gomez, and Isaac Ordonez will play Wednesday’s brother Pugsley. The showrunners have kept mum about whether or not the series will also feature Uncle Fester.

What about the rest of the cast of Wednesday?

We’re not sure who Christina Ricci is portraying, but Gwendoline Christie has been confirmed to play the headmaster of Wednesday’s new school. Unforunately, Thora Birch (who memorably starred as Enid Coleslaw in 2001’s Ghost World) won’t be making a comeback after all; a “personal matter” caused her to drop out midway through production.

What’s the show actually about?

Wednesday’s parents ship her off to Nevermore Academy, a school for, well, freaks, where they’re convinced she’ll finally fit in. And while the rest of the kids are just as creepy, Wednesday is still a bit hesitant to finally make friends. (When a classmate asks if she wants to take a stab at being social, she replies “I do like stabbing” with a straight face.) From there, things get weird: Wednesday embarks on a mission to “thwart a monstrous killing spree that has terrorized the local town” and solve a 25-year-old mystery involving her parents, all while attempting to master her psychic powers. “Little did I know I would be stepping into a nightmare,” she says in a voiceover. “Full of mayhem, mystery, and murder.” That means it’s right up Wednesday’s alley: “I think I’m going to love it here,” she says with the only smile in the whole trailer.

How closely related is it to The Addams Family?

Co-showrunner Miles Millar has said that Wednesday is “something that lives within the Venn diagram of what happened before, but it’s its own thing. It’s not trying to be the movies or the ’60s TV show. That was very important to us and very important to Tim.” We’ll have to wait until this fall to see if they’ve succeeded in making it feel like “an eight-hour Tim Burton movie.”