Astronomers estimate that the signal came from a galaxy roughly a billion light-years away, but the exact location and cause of the burst is unknown. A study detailing the findings published Wednesday in the journal nature.

Fast radio bursts, or FRBs, are intense, millisecond-long bursts of radio waves with unknown origins. The first FRB was discovered in 2007, and since then, hundreds of these quick, cosmic flashes have been detected coming from various, distant points across the universe.

Many FRBs release super bright radio waves lasting only a few milliseconds at most before disappearing completely, and about 10% of them have been known to repeat and have patterns.

One resource used to spot them is a radio telescope called the Canadian Hydrogen Intensity Mapping Experiment, or CHIME, at the Dominion Radio Astrophysical Observatory in British Columbia, Canada.

This telescope, in operation since 2018, constantly observes the sky and, in addition to fast radio bursts, is sensitive to radio waves emitted by distant hydrogen in the universe.

Astronomers using CHIME spotted something on December 21, 2019, that immediately caught their attention: a fast radio burst that was “peculiar in many ways,” according to Daniele Michilli, a postdoctoral researcher in the Massachusetts Institute of Technology’s Kavli Institute for Astrophysics and Space Research.

The signal, named FRB 20191221A, lasted for up to three seconds — which is about 1,000 times longer than typical fast radio bursts. 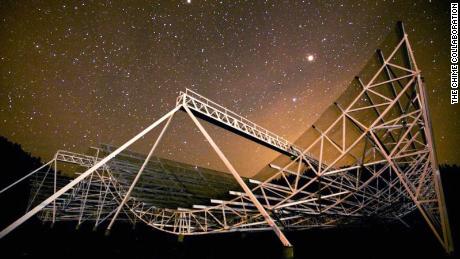 Michilli was monitoring the data as it came in from CHIME, when the burst occurred. The signal is the longest-lasting fast radio burst to date.

“It was unusual,” Michilli said. “Not only was it very long, lasting about three seconds, but there were periodic peaks that were remarkably precise, emitting every fraction of a second — boom, boom, boom — like a heartbeat. This is the first time the signal itself is periodic “

While FRB 20191221A has not yet repeated, “the signal is formed by a train of consecutive peaks that we found to be separated by ~0.2 seconds,” he said in an email.

The research team doesn’t know the exact galaxy from which the burst originated and even the distance estimate of a billion light-years is “highly uncertain,” Michilli said. While CHIME is primed to search for bursts of radio waves, it’s not as good at locating their origin points.

However, CHIME is being upgraded through a project where additional telescopes, currently under construction, will observe together and be able to triangulate radio bursts to specific galaxies, he said.

But the signal does contain clues about where it came from and what may have caused it.

“CHIME has now detected many FRBs with different properties,” Michilli said. “We’ve seen some that live inside clouds that are very turbulent, while others look like they’re in clean environments. From the properties of this new signal, we can say that around this source, there’s a cloud of plasma that must be extremely turbulent.” 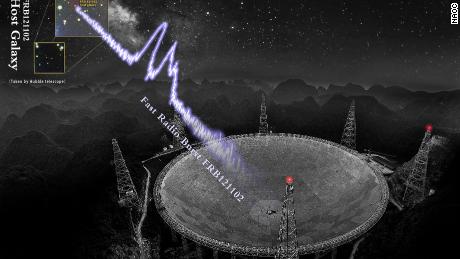 When the analyzed researchers FRB 20191221A, the signal was similar to the emissions released by two different types of neutron stars, or the dense remnants after a giant star dies, called radio pulsars and magnetars.

Magnetars are neutron stars with incredibly powerful magnetic fields, while radio pulsars release radio waves that appear to pulse as the neutron star rotates. Both stellar objects create a signal akin to the flashing beam from a lighthouse.

The fast radio burst appears to be more than a million times brighter than these emissions. “We think this new signal could be a magnetar or pulsar on steroids,” Michilli said.

The research team will continue to use CHIME to monitor the skies for more signals from this radio burst, as well as others with a similar, periodic signal. The frequency of the radio waves and how they change could be used to help astronomers learn more about the rate of the universe’s expansion.

“This detection raises the question of what could cause this extreme signal that we’ve never seen before, and how can we use this signal to study the universe,” Michilli said. “Future telescopes promise to discover thousands of FRBs a month, and at that point we may find many more of these periodic signals.”