Morrison was let go after the audition rounds for failing to follow “competition production protocols,” which purportedly had to do with texting a contestant.

Matthew Morrison’s wife joined the conversation after the “Glee” alum took to social media to defend himself following an anonymously sourced media report that he’d sent “flirty” text messages to a contestant on “So You Think You Can Dance.”

In his video response, Morrison shared the one text he says he sent, which had virtually no context at all. “Hey! It’s Matthew. If you don’t mind, would love to get your number and talk you through some things,” he read. That’s it. That’s the text.

He went on to explain that he was reaching out because they had a mutual relationship with a choreographer he’d known for 20 years and it was his hope that this choreographer could get hired for “SYTYCD.”

Morrison was one of the new panelists on the returning show, joining JoJo Siwa and Stephen “tWitch” Boss. according to TMZthe contestant shared the message with producers, which is what led to his removal.

The outlet further reports that Morrison says he was unaware that his contract forbade him from any contact with contestants, as that was different to how dance shows in the UK he’d worked on operated.

After explaining why he’d reached out to the dancer, Morrison said, “it’s devastating that we live in this world where gossip rules and people’s lives are being thrown around as clickbait.”

“I think this is much bigger than me and this story,” he continued. “Gossip is toxic and it is destroying our society and we need to do better.” 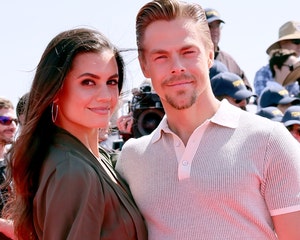 Derek Hough Engaged to Hayley Erbert: ‘The Beginning of Forever’

He then heaped praise on the show, the cast and his fellow judges. Morrison will continue to appear for one more pre-taped episodes before being replaced heading into the Top 12 performance shows starting June 15. His replacement has not yet been announced.

After he shared his message video, Morrison’s wife Renee also shared the clip to her Instagram page, calling the whole experience “a wild ride” in her caption.

She praised her husband for the “grace and integrity” he showed “in a situation that is complex and incredibly complicated.”

She then echoed his statements about gossip in general, writing, “Gossip and cruelty are poison that have penetrated the depths of our society and somehow have made people forget their true nature- Love & compassion.”

She shared two quotes relating to negativity and the power of letting it go. “Perspective my people,” she wrote. “Stop perpetuating hate and shame. Period. NO ONE DESERVES IT.” You can check out her full comment, as well as Morrison’s statement below.

Season 17 of “So You Think You Can Dance” airs Wednesday nights at 9 pm ET on Fox. For now, Morrison will continue to feature, but a change is coming!