Jennette McCurdy On Why She Was 'Jealous' of Ariana Grande, Reveals Breaking Point - Upsmag - Magazine News Skip to content “So now, every time she misses work, it feels like a personal attack.”

Jennette McCurdy is opening up about her working relationship with her “Sam & Cat” co-star Ariana Grande.

according to Entertainment Tonightin her bombshell new memoir, “I’m Glad My Mom Died,” the ex-actress detailed why she was “jealous” of her co-star during their time on the one-season Nickelodeon sitcom, and revealed the moment when she reached every breaking point.

McCurdy famously starred as Sam Puckett in “iCarly,” while Grande appeared as Cat Valentine in “Victorious,” and the two reprized their roles in the spinoff “Sam & Cat,” which ran from 2013 to 2014.

Miranda Cosgrove on Jennette McCurdy Quitting Acting, Speculates What Sam Would Be Up to Now

Jennette, now 30, shared the several reasons why she had feelings of jealously towards Ariana, now 29, including how the latter was allegedly permitted to “regularly” miss filming “Sam & Cat” in order to fulfill obligations in her music career, such as to “sing at award shows, record new songs, and do press for her upcoming album.”

However, McCurdy argued that she wasn’t given the same treatment by Nick, saying that that she had to “turn down” two feature film roles when she was on “iCarly” because the show wouldn’t write her out of episodes so she could movie the movies.

While Jennette pointed out that Ariana initially would only be out occasionally, she said it reached a point in which Grande allegedly missed an entire week of shooting — something McCurdy seriously took issue with.

“The week where I was told Ariana would not be here at all, and that they would write around her absence this episode by having her character be locked in a box. Are you. Kidding me,” she recalled. “So I have to turn down movies while Ariana’s off whistle-toning at the Billboard Music Awards? F—. This.”

Jennette added that she came to “resent being a good sport,” noting that if she hadn’t been “such a good sport” from the get-go she wouldn’t have found herself in the situation. She went on to point out that she’d think about what might have been, sharing that she would “fantasize” about her life being “different” instead of her being on a “s — ty show saying these s — ty lines on this s — ty set with this s — ty hairstyle.”

“But it’s not different. It’s this,” McCurdy wrote. “This is what it is. Ariana misses work in pursuit of her music career while I act with a box. I’m pissed about it. And I’m pissed at her. Jealous of her.”

Jennette also cited her jealousy over what she perceived as Grande’s “much easier upbringing.” McCurdy went on to explain that she originally believed she was going to be getting her “own show” as part of her development deal with Nickelodeon, not “Sam & Cat,” which she called “some half-baked two-hander.”

Jennette said was also envious of how Ariana’s career was progressing, while hers wasn’t, admitting that she often compared her career to her co-star. McCurdy also claimed that Grande did n’t “exactly try to hide her successes” either. 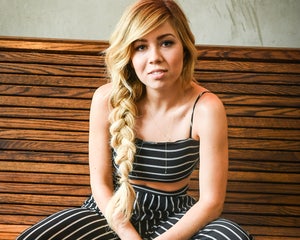 However, as for what ultimately “broke” and “finally undid” her, Jennette said it went down after Ariana spent the night prior at an A-lister’s house.

“Ariana came whistle-toning in with excitement because she had spent the previous evening playing charades at Tom Hanks’s house,” she recalled, writing, “That was the moment I broke. I couldn’t take it anymore. Music performances and magazine covers … whatever, I’ll get over it. But playing a family game at National Treasure, two-time Academy Award–winner and six-time nominee Tom Hanks’s house? I’m done.”

McCurdy said that was the final straw, saying she “didn’t like” and “couldn’t like” Grande after that.

“Pop star success I could handle, but hanging out with Sheriff Woody, with Forrest F—ing Gump? This has gone too far,” she wrote. “So now, every time she misses work, it feels like a personal attack. Every time something exciting happens to her, I feel like she robbed me of having that experience myself.”

McCurdy’s memoir, “I’m Glad My Mom Died” is out now.