Photo-Illustration: by The Cut; Photo: Shutterstock

If there’s one thing Queen Elizabeth loves, it’s martinis. If there’s two things she loves, it’s martinis and animals. On Thursday, the queen celebrated her 96th birthday alongside two of her ponies, a dream for children and British monarchs alike. The palace shared a picture of the queen between the two little white horses, named Bybeck Nightingale and Bybeck Kaie, on the royal family’s Twitter account. Do you think the queen has any idea what a Twitter is? Anyway … look at this woman! She loves these little guys! 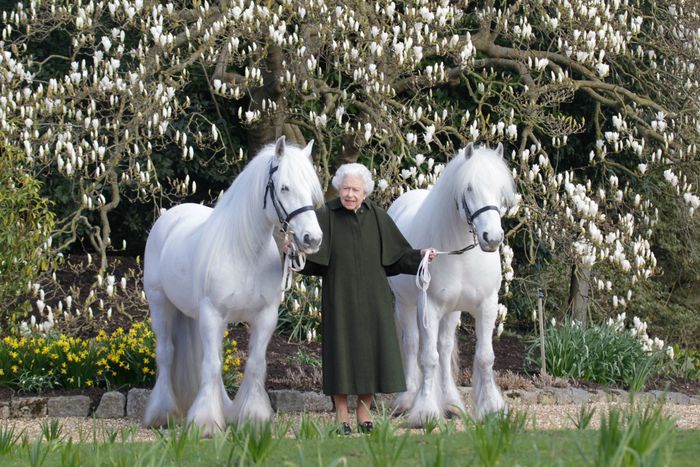 Of course, the queen having a couple of horses is unsurprising. The woman obviously has pony money. In addition to her various horses, she is known for her collection of corgis, arguably the funniest breed of dog for a fancy lady to own. She currently has two corgis and two dorgis — a crossbreed between a corgi and a dachshund that the queen is credited with creating. A girlie in every Dr. Frankenstein era! The queen’s love of corgis, dorgis, et al. started when she was just a small monarch. One of her first pets was a corgi whose official name was Rozavel Golden Eagle. This makes me feel better about telling people that my dog’s name, Ava, is short for Cavatappi. (It’s not.) Of course, it’s not easy to yell, “Rozavel Golden Eagle, stop scooting on the rug!” Thus, this dog was more commonly known as Dookie. (I would pay $1,000 US to hear the queen of England call out the name “Dookie.”) But Queen Elizabeth’s menagerie does not stop there.

Throughout her 70-year reign, Queen Elizabeth has been gifted many animals. In 1957, she was given a cow named Beauchamp Oxford Lady (all cows should have three names!). In the ’60s, she was given a pair of pygmy hippopotamuses from the president of Liberia. (Those were donated to the London Zoo.) In 1970, Canada sent the queen a couple of beavers and an Arctic fox. For her 90th birthday, she was gifted a black brideng named Sir John — hopefully the horse’s knightship made up for the fact that, like all bridengs, he was castrated. Over the years, the queen has also been gifted a sloth, a pig, an elephant, a crocodile, four cockatoos, two wallabies, a cassowary, two jaguars, two giant tortoises, a pig, more than a dozen different kinds of horses, and, in the words of the Royal Collection Trust, “at least two kangaroos.” Most of these animals have been donated to various zoos, but I choose to imagine this 96-year-old woman has a big, big garden where all of these creatures live in harmony. Still, the queen’s collection of animals doesn’t end there.

Queen Elizabeth technically owns every swan in England. Every! Swan! More specifically, she holds claim to any swans that live in British open waters. There’s a yearly event calling the Swan Upping in which a team of rowers travel down part of the River Thames and take a census of the swans, checking on their health and yelling “All up!” whenever they spot a group of swans. Every family has their traditions, I suppose. Like the swans, Her Majesty also claims ownership of all the whales, sturgeons, and dolphins in the waters surrounding the UK thanks to statute established in the 14th century. A modern day Little Mermaid!

However, of all the animals connected to the queen, my personal favorite is this colony of bats that have reportedly taken residence in Balmoral palace. Because bats are a protected species in the UK, there are strict laws when it comes to removing them from their habitat even if that habitat is a royal estate. I suppose, in this sense, the bats own the queen.