In fashion, as in life, the more things change, the more they stay the same. Against a backdrop of shifting tastes and values, the Ralph Lauren polo shirt has remained a constant of American style for 50 years.

Since its introduction, in 1972, the little shirt that could—a mainstay that Lauren has described as “the most democratic of wardrobe garments, as ubiquitous as a pair of jeans”—has been interpreted in a kaleidoscope of hues, as well as in classic, big, skinny, and high-fashion fits. (There is even a version for the yuppie puppy in your life.) The polo’s iconic logo, a design flourish that first appeared on a women’s tailored shirt in 1971, has likewise been rendered in a host of colors and sizes. 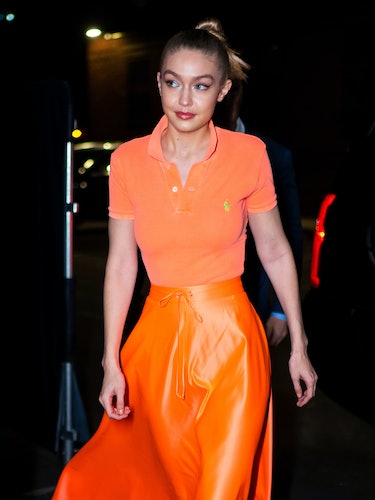 As a whopping new book, Ralph Lauren’s Polo Shirt (Rizzoli), illustrates, this humble garment, inspired by one of the most elite sports, has come to mean all things to all people. It’s a badge of nouveau preppy cosmopolitanism, but it’s also favored by rappers, royalty, and regular folk. In the book’s more than 400 photographs, we see the shirt worn with equal ease by Ronald Reagan, Gigi Hadid, and Spike Lee.

“I think that’s exactly what makes the polo shirt so appealing,” says David Lauren, son of Ralph and the chief branding and innovation officer at Ralph Lauren, who notes that the polo can be dressed up or down, or even worn with a ball skirt. “I think people feel as though they’re a part of something bigger; it’s a chance for self-expression and a way to parttake in their version of the American dream.” Or, as the filmmaker Ken Burns rhapsodizes in his elegant introduction, neatly summarizing the polo’s schismatic allure: “When you wear a polo shirt, you’re instantly engaged in a profound irony between being unique, but also—because so many others in the world wear it—belonging.”

In addition to being enlisted in the service of high fashion and sport (everything from equestrian styles to tennis looks to the official uniform of the US Olympic team), over the years the durable cotton mesh shirt, which is in the permanent design collection at MoMA , has been deployed to reflect Lauren’s enduring interest in militaria. Inspired by the Army Navy surplus stores that he visited as a young man, he has issued limited-edition collections of military styles and tour shirts resembling the embroidered souvenir jackets of servicemen returning from duty in Asia at the end of World War II.

In fact, so many special capsule collections have been issued over the years, boasting crests and patches galore, that in the lead-up to this year’s golden anniversary, the company has made select vintage and collectible designs from its archives available for purchase. “It’s been such a treat to hear the many stories of people who have worn the polos and said they get better with age,” says David Lauren. “That’s one of the reasons we wanted to source some of our most unique shirts from the past few decades. You can show off your own vintage polo look by going back in time and buying the piece you always had your eye on.”

the reclaimed shirts will drop on the Polo app and in select stores around the world; they will also be featured for a limited time in pop-ups in Berlin and Tokyo to coincide with the release of the book. And in true Ralph Lauren fashion, the tome is being issued with five different collectible covers. As Lauren himself said, “In the end, it was never about a shirt, but a way of living.”