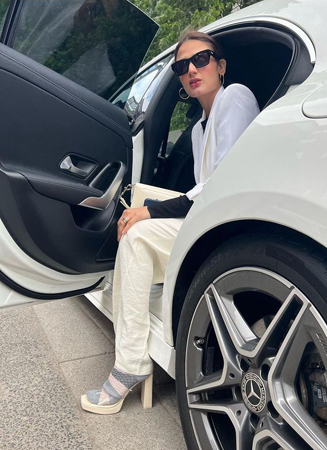 Pakistani actor and model Hira Mani has recently been subjected to mockery online as she was spotted wearing socks with heels.

As Mere Paas Tum Ho actor shared the picture on her social media, she received rude comments for fashion choice.

Hira Mani, who is vacationing these days in Manchester, posed in white attire however the sneakerheads called her out.

Some asked whether they were comfortable and allowed her to walk the way it is while others were not too impressed with her fashion style.

This is not the first such experience for the 33-year-old star as she often invites trolling owing to ‘unique dressing sense’.

The TV actress however has won many hearts with her brilliant acting skills. She has given back-to-back hits to Pakistani drama industry including Do Bol, Ghalti, Dil Mom Ka Dia, Sun Yara, Mere Paas Tum Ho, and Kashaf.