The most important rule, the rule you can never forget, no matter how much he cries, no matter how much he begs, is never feed a Mogwai after midnight. The second most important rule is don’t get Joe Dante started on Baby Yoda. the Gremlins auteur spoke to the San Francisco chronicle ahead of the fall release of a new animated HBO Max spinoff series, Gremlins: Secrets of the Mogwai. This follow-up to Dante’s 1984 classic and its sequel Gremlins 2: The New Batch is the latest ’80s nostalgia property to get a new life on streaming, alongside series like Apple TV+’s Fraggle Rock: Back to the Rock and Disney+’s Willow. “I think the longevity of (the films) is really key to this one character (Gizmo), who is essentially like a baby,” Dante told the SF chronicle. “Which brings me, of course, to the subject of Baby Yoda, who is completely stolen and is just out-and-out copied. Shamelessly, I would think.”

Dante is referring to the breakout (the) Child star from Star Wars streaming series The Mandalorian, who does share with Gizmo wide bush baby eyes, a head shaped like a donut peach, big fennec fox ears, and endless merch potential. This isn’t the first time a cute little critter has been accused of copying Gizmo. After Hasbro launched Furby in 1998, Dante alerted Warner Bros. “to the similarities between Gizmo and the Furby — and lo and behold, soon there was an actual Gizmo Furby!” Dante said in a 2012 Reddit AMA. Regardless of whether their dads get along, it looks, at least, like Grogu and Gizmo get along just fine. 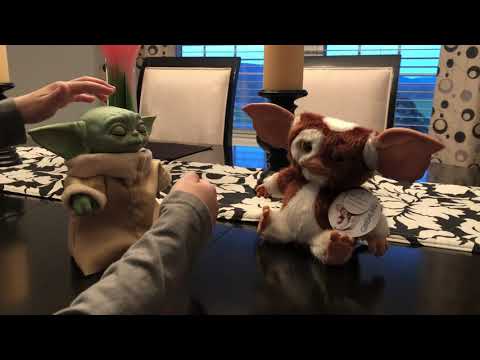