“My face was so f—ed. I had to go and get this whole thing dissolved.”

The Kardashian family has set a new standard for beauty, starting trends with everything they do, from their fashion choices to their hairstyles to their makeup. But as time has gone on, their appearance has raised questions about how much of their look is real — and how much has been cosmetically altered.

While fans and plastic surgeons often speculate about the procedures the Kardashians have had done, the family themselves have actually been open about going under the knife. And although it may come as a surprise to some, the family say that their plastic surgery procedures are few and far between. Instead, their perfect appearance is thanks to great dermatologists, a stellar glam team and some good genes!

Here’s what the Kardashians had to say about plastic surgery…

Over the years Kim Kardashian has shot down plastic surgery rumors, denying that she’s gotten a nose job or any other work done. Although she says she hasn’t gone under the knife, she does admit to trying out laser skin treatments like “vampire facials” and occasionally getting Botox. She’s also done laser hair removal on her face and, post-pregnancy, she says she had her stretch marks removed and her belly button tightened with a nonsurgical procedure.

Like her sister Kim, Khloe Kardashian has faced neverending plastic surgery rumors, with some people accusing her of going as far as to get a “face transplant.” Khloe says none of it’s true and the only work she’s actually had done is a nose job. Khloe admits she has tried fillers and Botox but she has shied away from the injections because she “responded horribly.”

“[Fillers] did not work for me. I looked crazy, and I still think the effects are in there. I went to have it all dissolved like three times. My face was so f—ed I had to go and get this whole thing dissolved. It was a bummer and now I’m afraid to do it again. And I’m almost like, I swear things are still in my face,” Khloe shared in 2016.

During an appearance on E!’s “Keeping Up with the Kardashians” reunion several years later, she added, “For me, everyone says, ‘Oh my gosh, she’s had her third face transplant,’ but I’ve had one nose job, Dr. Raj Kanodia, and everyone gets so upset, like, why don’t I talk about it. No one’s ever asked me.” 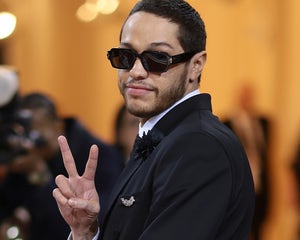 Pete Davidson Reveals He Wants to ‘Have a Kid,’ Talks Difficult Childhood

Kourtney Kardashian has faced her own set of plastic surgery accusations but the only procedure she has said she has undergone was getting a boob job when she was 22. Kourtney says she actually regrets the surgery and wishes she hadn’t gone through with it.

The reality star also claims she doesn’t even use fillers, shut down a social media commenter in 2019 who accused her of altering her face. Then in 2021, Kourtney denied that she had gotten a butt augmentation when an Instagram follower wrote that she had gotten “plenty of surgery” including a “nose job, some sort of butt shot or bbl just to start.”

“No better compliment than a ‘too good to be real’ kind of compliment. Butt shot and Brazilian butt lift? Um, thanks. And you were just getting started,” Kourtney wrote back.

Kylie Jenner says she hasn’t gone under the knife yet but doesn’t see anything wrong with people who do. For now, Kylie is sticking with injections, which she first opened up about 2015 when she began getting temporary lip fillers. Kylie noted that in addition to fillers in the rest of her face, a lot of her appearance is just really good makeup.

“People think I fully went under the knife and completely reconstructed my face, which is completely false. I’m terrified! I would never. They don’t understand what good hair and makeup and, like, fillers, can really do. It’s fillers. I’m not denying that,” Kylie told paper. 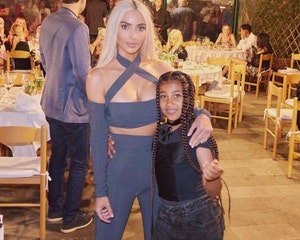 Out of all the Kardashian-Jenners, Kendall has remained the most mum on whether she’s had work done. Over the years, Kendall has sparked rumors that she’s gotten a boob job and lip injections but she’s chosen not to respond for the most part. One of the only times Kendall spoke out was in a video shared by Kylie, who shot down rumors Kendall had gotten lip fillers on her behalf.

Kardashian-Jenner matriarch Kris Jenner has been the most open about her plastic surgery procedures, opening up about what she’s had done before and after skyrocketing to fame on “Keeping Up With The Kardashians.” Kris admits that back in the 80s, she got a boob job but eventually got it reduced in the early 2010s.

“[I’ve had] Botox and fillers and laser and things like that. I had a boob job in the ’80s after four kids because gravity took over…I felt matronly and nothing fit anymore, and suddenly, it was like get them out. So, the same doctor who put them in, he took them out, and then had to do a little lift and then put smaller ones in,” Kris said on “E!’s Good Work“in 2015.

Kris even went under the knife on her reality TV show, getting a neck lift while cameras rolled in 2011 and then getting a televised earlobe reduction in 2018.

Click to rate this post!
[Total: 0 Average: 0]
Related Posts
10 movie stars whom Got Real About coping with Cyberbullying
Brad Pitt Considers His Career “on [Its] Last Leg”
Jesse Palmer Weighs in on Gabby Windey and Erich Schwer’s Break up
Leave a Comment