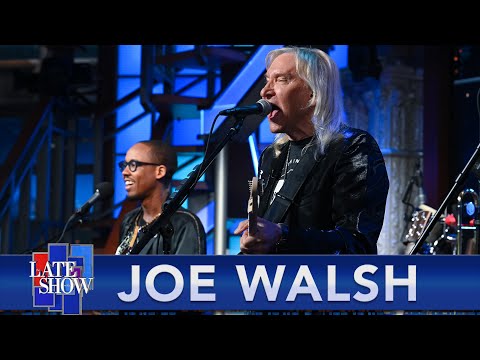 The more we think about it, why not make Joe Walsh, the clown prince of rock, The Late Show‘s permanent in-house musician? Imagine the carousel of virtuosic buffoonery on any given week: Brother-in-law Ringo stopping in on Tuesdays; Don Henley swinging by once a month to grouse about the Rock Hall; the guitars from “Funk #49” and “Rocky Mountain Way” in conversation. Stephen Colbert doesn’t even have to be there. Anyway, Walsh is enjoying a Late Show residency this week, which excites Colbert so much that he lists all of Walsh’s accomplishments in one breathless sentence. It’s also particularly gratifying for the host because Walsh admits he “gets a little more money with the Eagles.” “But this is fine,” he insists, “I don’t mind.”