Each afternoon, Dr. Jane Goodall sits beneath the beech tree in her garden and waits for a black bird and a European robin to visit. “They’re both very tame,” Goodall says with her eyes closed and a soft smile. She is Zooming with me from her childhood home in Bournemouth, UK, where she has lived for much of the pandemic. As a kid, Goodall spent hours climbing, exploring, and occasionally falling out of that beech tree. Now 88 years old, she enjoys her lunch beneath its shade and waits for her bird friends to visit—which they do, without fail, nearly each day. It’s how Goodall “keeps in touch with nature” at a time when so much of her life is spent inside, in isolation. That’s not to say that Goodall hasn’t been kept busy. In the last few years, she has participated in virtual Earth Day eventsurged the world to prioritize science during the pandemicand teamed up with HP for a new tree planting campaign called ‘Plant a Tree with HP.’

In ELLE.com’s monthly series Office Hourswe ask people in powerful positions to take us through their first jobs, worst jobs, and everything in between. This month, we are featuring goodall, the inimitable primatologist and anthropologist, who opened up about standing her ground as a young girl, the invaluable career advice her mother imparted, and why tree planting is so “desperately important” for biodiversity.

My aunt was a physiotherapist. She had a huge clinic for children, and treated all the orthopedic cases that, in those days, were mostly rickets and polio. When the doctor visited once a week to check everything, he made notes. I was there with my brand new secretarial training to take down the notes and transcribe them and type them out. I haven’t the remotest idea how much money I made. But if you put it in today’s terms, it would look ridiculous. It was very little money. I think what the job gave me was a real empathy for children who are born with disabilities and the way that they cope, and how extraordinary it is that you’ll see a child who has lost the use of both legs because of polio and she’s cheerful. They were so courageous, these children. Just as the chimps taught me about chimp and human nature, these children taught me a lot.

Everybody always laughed when I said that I was going to go to Africa to live with wild animals and write books about them. How could I get to Africa? It was far away. We didn’t have much money. World War II was still raging. I was a mere girl. But my mother said, “If you really want to do something like this, you’re going to have to work really, really hard, and take advantage of every opportunity. Then, if you don’t give up, hopefully you’ll find a way.”

On standing up for what I believe in

When I first started working with chimps, I was told that I’d done everything wrong. I shouldn’t have given the chimps names; I should have given them numbers instead. I couldn’t talk about their personalities, minds or emotions, because those were unique to us humans. Well, I’d already learned from my childhood dog that that was all rubbish. He was a mutt called Rusty, and he was my teacher. He was black, sort of the size of a cocker spaniel, and he found me. He didn’t even belong to us. We never fed him. He lived in a hotel around the corner. But he arrived at 6 am every morning, went home for lunch, and came back and stayed until we went to bed at about 10 pm So, I very quietly went on writing about chimps in the way that I knew was correct. Then, when I was then supported by Hugo van Lawick’s documentary film evidence, science gradually changed its mind. Now you can study animal emotions and minds and certainly intellect. 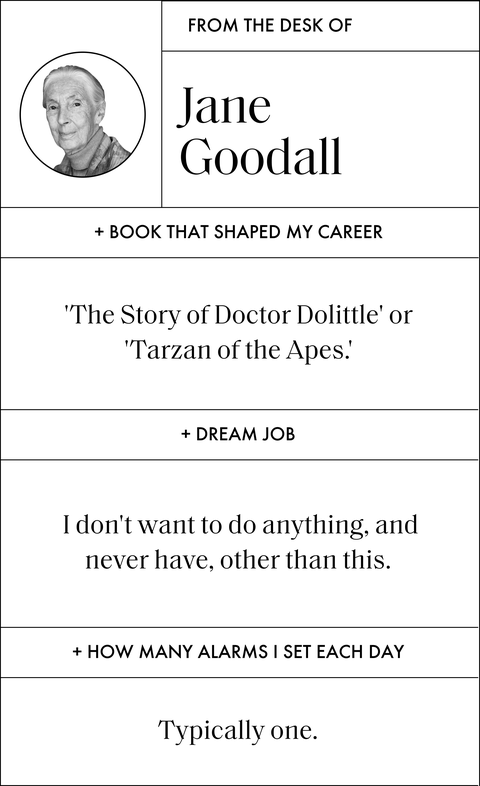 My advice to young people

Have hope. But hope doesn’t mean just sitting around hoping something will come, or hoping that something will get better. Hope is all about action. Roll up your sleeves and get out and do something. The problem is that so many people look around the world and get very depressed. You can’t actually look at what’s happening around the world and not be depressed. When you hear the phrase “think globally, act locally,” it’s the wrong way around. So what you first have to do is think: What can I do in my own community, in my own area? What do I care about? Think what you can do about it. Persuade some other people to help you. See that you make a difference. Then, knowing other people are feeling the same and doing the same, you should dare to think globally.

How I started a tree planting campaign

When I began work with the chimps in Gombe National Park in Tanzania, I knew there was deforestation going on and that chimp numbers were decreasing. The first time I flew there, I saw that people were also struggling to survive. That’s when I realized that if we didn’t help these people to find ways of living without destroying their environment, without cutting down the trees to make more land for growing crops or to make money from charcoal and timber, then we couldn’t save chimps, the forest, or anything else. In 1994, we got our first grant to plant trees in the villages around Gombe. That has since blossomed into a program in 104 villages. The trees have come back, because nature is so resilient. That same effort is now going on in six other countries. We focus on giving tools to local communities, and we also fight with Indigenous peoples to protect their land and to reforest it. This protects the biodiversity and endangered species and improves the lives of the people.

Restoring forests that are being cut down, leaving land alone so that it regenerates itself, and deliberate tree planting are all desperately important when it comes to bettering biodiversity. This also includes, very importantly, urban tree planting. We need to bring nature and shade into our cities for the mental and physical wellbeing of people.

This interview has been lightly edited and condensed for clarity.