“Perhaps no music has had as profound and powerful an impact in shaping America’s musical score as Black music,” Biden said in the proclamation issued Tuesday.

“For generations, Black music has conveyed the hopes and struggles of a resilient people — spirituals mourning the original sin of slavery and later heralding freedom from bondage, hard truths told through jazz and the sounds of Motown during the civil rights movement, and hip -hop and rhythm and blues that remind us of the work that still lies ahead,” the President added.

The National Museum of African American History and Culture credits then-President Jimmy Carter with creating the appreciation month in 1979, noting that it “celebrates the African American musical influences that comprise an essential part of our nation’s treasured cultural heritage.”
The celebration, the museum notes, is reestablished annually by presidential proclamation.

Carter hosted a celebration for Black musicians at the White House in 1979 with performances from Chuck Berry, Billy Eckstine and others. 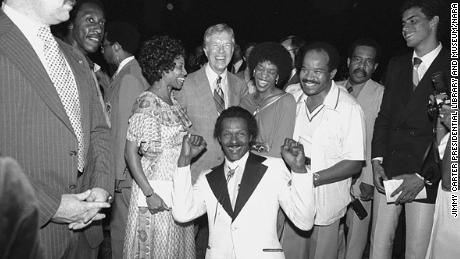 carter, addressing the crowdsaid at the time, “If we had the Black Music Association organized 203 years ago, so that Benjamin Franklin and Thomas Jefferson and George Washington could have just heard some of this music at the very beginning, our country could’ve avoided a lot of trouble, a lot of heartache, and a lot of struggle, and a lot of suffering and a lot of division, and would be even greater than it is now.”

Carter credited Black music with exemplifying the pursuit of happiness and as an “avenue for understanding and friendship that has been effective when politicians could not succeed.”

In his proclamation, Biden noted that “throughout the decades and across the country, Black music has fueled a myriad of genres — from rhythm and blues to jazz, gospel, country, rap and more.”

It has also been tied to political moments. Young Jeezy’s song “My President” stands as a commemoration of Barack Obama’s election as the nation’s first Black president.