Whether you first viewed it on VHS, DVD, a streaming service, or a camp movie-theater outing during the sweltering summer of 1992, A League of Their Own holds a special place in the hearts of millions. The beloved baseball movie, which starred an A-list roster of Tom Hanks, Geena Davis, and Madonna, is not just celebrating its 30th anniversary this year, it’s also the basis for Prime Video’s new TV adaptation.

Make no mistake: The series version of A League of Their Own is not a remake or a reboot. Co-creators Abbi Jacobson (who also stars as Rockford Peaches catcher Carson Shaw) and Will Graham have provided their 2022 audience with a richly layered new story featuring all original characters. Most importantly, the series delves into the overlooked stories from the 1943-set film, namely those of LGBTQ and black female players.

But although Jacobson and Graham have taken A League of Their Own in a more diverse direction, their love and respect for the movie is still palpable. In addition to meeting with Penny Marshallthe film’s director, prior to her death in 2018 to obtain her blessing for their project, the co-creators have also peppered the series with an array of callbacks to the film — so much so that League screenwriters Lowell Ganz and Babaloo Mandel are credited at the end of each episode. So we’ve compiled this episodic guide to all the references, nods, and winks this Peaches season makes to its ’92 predecessor. 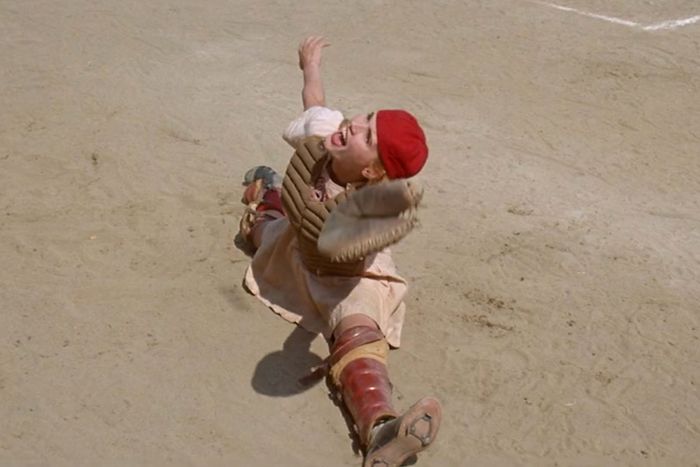 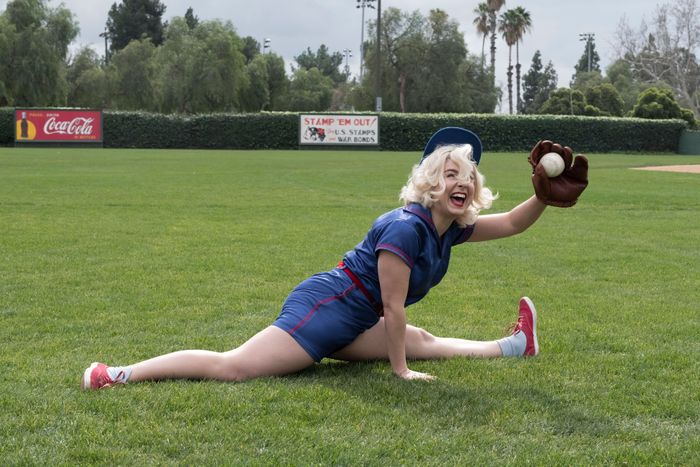 The TV series doesn’t waste any time arriving at its movie Easter eggs: In the movie, Oregon dairy farmers Dottie Hinson (Davis) and her sister Kit Keller (Lori Petty) must jump onto an already departed train so they don’t miss the All-American Girls Professional Baseball League tryouts in Chicago. Carson Shaw (Jacobson) does the same during the pilot episode’s opening sequence.

Although the AAGPBL’s racist policies were relegated to a 15-second scene in the League of Their Own film, that quarter-minute is now the foundation for half the series’ narrative. Max Chapman (Chanté Adams), like the unnamed black woman (DeLisa Chinn-Tyler) in the movie, has an exceptional pitching arm, but due to this being 1943 America, she’s forced to watch from the sidelines while the white women (and Black men) play ball.

What would A League of Their Own be without a tension-building tryout sequence? The series took from the film’s playbook in several instances here, starting with Carson, Greta Gill (D’Arcy Carden), and Jo De Luca (Melanie Field) entering Baker Field in a shot-from-behind approach that echoes when Dottie, Kit , and Marla Hooch (Megan Cavanagh) first stepped onto Harvey Field. The series’ tryout montage is also comparable to the film’s, with plenty of jumping jacks and toe touches.

Movie reference: Catching a baseball while doing a split

Geena Davis catching a baseball while doing a split is one of the many memorable images from A League of Their Own (it even landed her character on the cover of life magazine!). The series honors that moment during the tryouts montage, when Maybelle Fox (Molly Ephraim) channels her own Dottie Hinson.

The Rockford Peaches’ resident Canadian in the series, Jess McCready (Kelly McCormack), is from Saskatchewan. In the movie, Alice “Skeeter” Gaspers (Renée Coleman) hailed from the same province and, like Jess, was the Peaches’ sole player from Canada. Jess and Alice are also the most superstitious Peaches, believing it’s bad luck to change any article of clothing or routines throughout the team’s winning streaks.

Movie reference: A night out at the Suds Bucket

Upon their arrival in Rockford, Illinois, the Peaches head out to a local bar for some swing dancing, suggestive of the raucous Suds Bucket roadhouse scene from the movie. So much so that the glamorous Greta — whose look and style evoke Madonna’s Mae Mordabito — even does one of Mae’s dance moves. 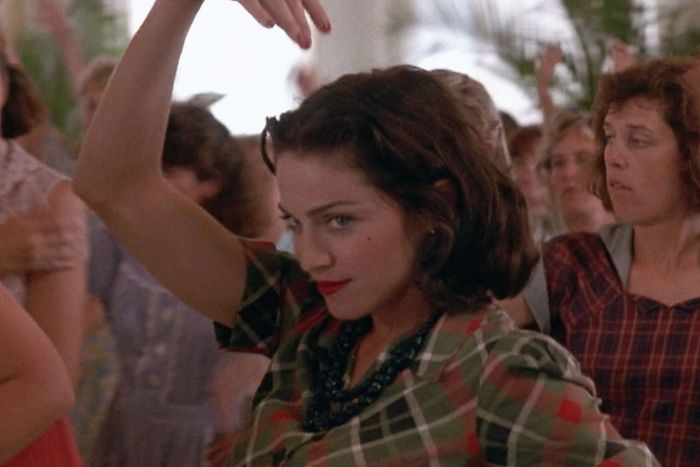 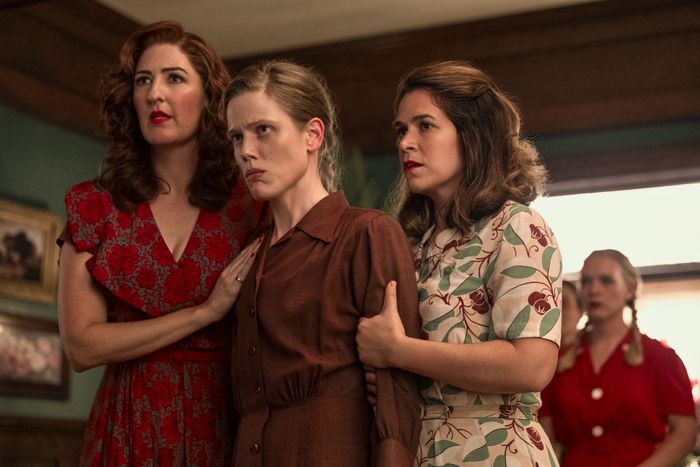 Movie reference: Squatting in skirts is a bitch

Especially if you’re playing catcher in the AAGPBL. When Carson complains about having to squat while wearing a skirted baseball uniform, sharp-eared A League of Their Own movie fans will recall Dottie grumbled to Kit about the same thing.

The awkward charm-school sequence is one of the many amusing moments from the 1992 movie — we love you, Marla Hooch! — that was also based in reality. But the series’ version takes a much darker turn, insinuating that the players’ makeovers and etiquette lessons were a method of weeding out anyone who was, as Greta explains to Carson, “too queer.”

In both the movie and the TV series, the Rockford Peaches’ first game is marred by an obnoxious male heckler from the stands. As in the film, the Peaches receive sexist jeers for daring to be women and ballplayers, with Jo also on the receiving end of vicious fatphobic comments. 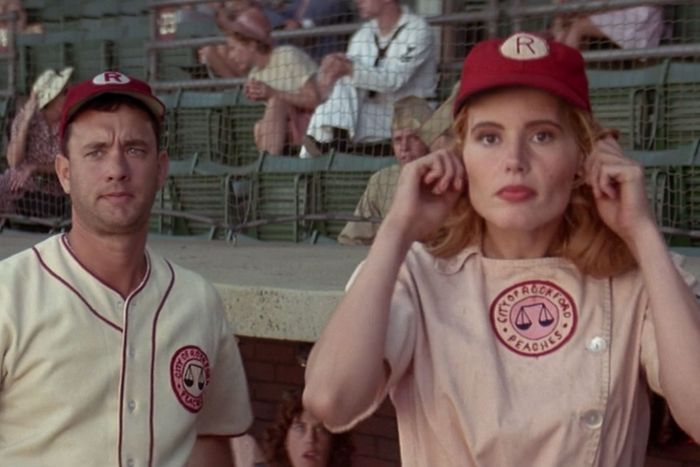 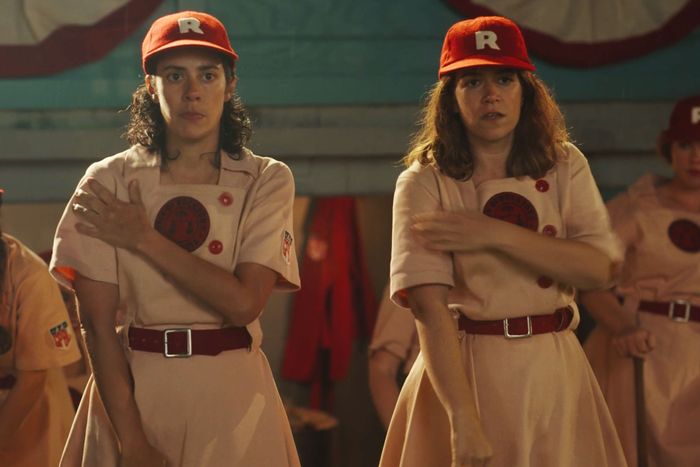 The series’ fourth episode opens with a black-and-white newsreel all about the newly formed AAGPBL. Just like in the movie, this newsreel demonstrates how the female players are both skilled at baseball and models of femininity — with several ladies knitting in the dugout, à la the movie’s Betty “Spaghetti” Horn (Tracy Reiner).

Both the film and the TV series feature a key moment where the Peaches’ male coach (Hanks’s Jimmy Dugan in the movie; Nick Offerman’s Dove Porter in the series) offers his star catcher some chewing tobacco as a sign of respect. Although Dottie takes to it like a pro, Carson spits the stuff out in disgust.

Nothing says passive-aggressive like a baseball coach and his catcher confusing the hell out of their best hitter. Who could blame poor Marla for doing a home-plate tap dance while Jimmy and Dottie channeled their mutual disdain into an elaborate hand-signal ballet? Even though Carson and Lupe García (Roberta Colindrez) are working together when they too engage in their own side-by-side hand signals, it’s obvious the movie inspired this collaborative moment. 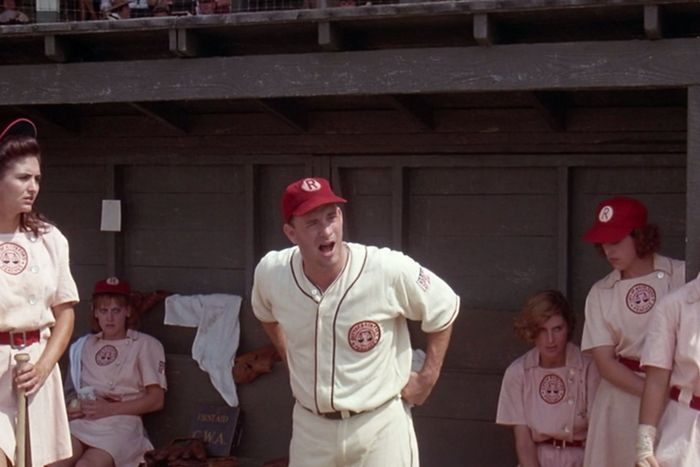 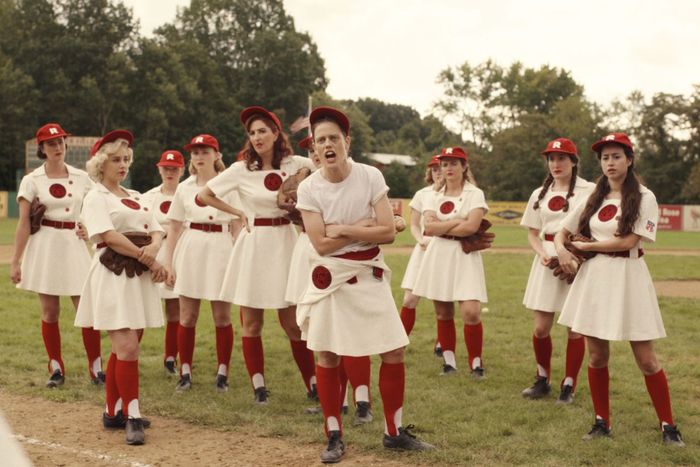 I mean, you can’t have a TV show, call it A League of Their Ownand note include “There’s no crying in baseball!”, right? Kelly McCormack’s Jess (with an able assist from Lupe) has the honor of putting her own spin on the immortal Tom Hanks line, chastising Carson for daring to shed tears during her stressful first practice as team coach. 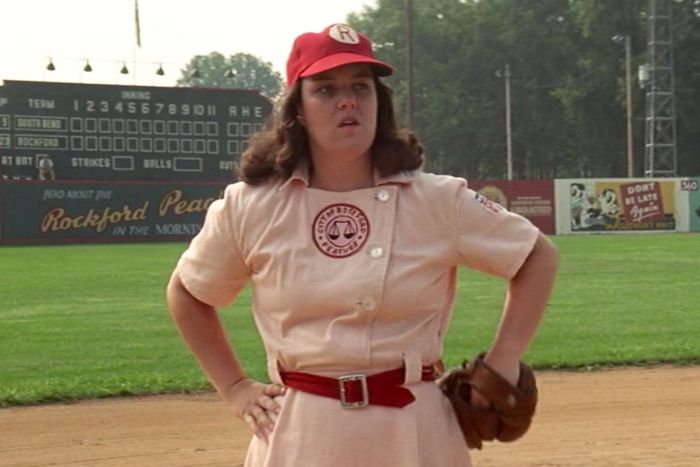 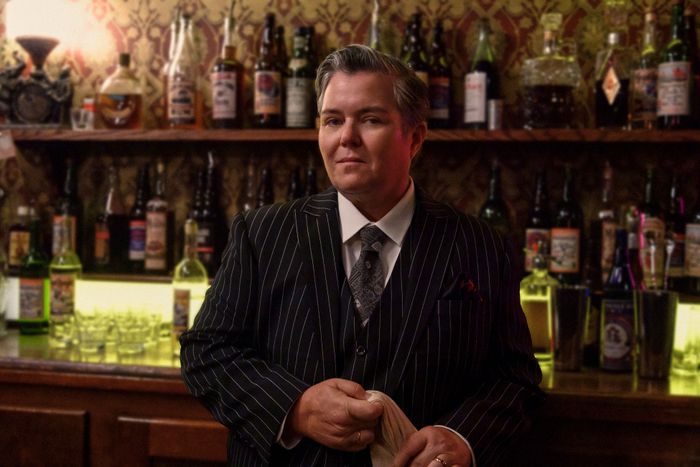 As the only League of Their Own movie cast member to show up in the new series, Rosie O’Donnell makes the most of her one-episode appearance as Vi, the owner of Rockford’s underground LGBTQ bar and Carson’s benevolent guide to gay life in 1943. Vi is worlds away from bouncer turned third basewoman Doris Murphy, the role O’Donnell played in the 1992 film. Unlike Doris, whom O’Donnell initially read as gay (though Penny Marshall insisted she wasn’t), there’s no question about Vi’s sexual orientation. Vi is the first person to suggest to Carson (who left her husband to join the Peaches) that a future with a same-sex partner is n’t just a fantasy. But O’Donnell’s cameo isn’t all sunshine and rainbows: Vi getting viciously beaten during a raid on the bar is a harsh reminder that to be gay in 1940s America meant constantly living in fear.

Movie reference: The Wizard of Oz

“Stealing Home” features countless nods to the classic 1939 movie and its connection to the LGBTQ community: It’s playing at the Rockford movie theater, which just happens to be adjacent to Vi’s secret bar. Plus, the accountant who serves as Vi’s front screens potential patrons by asking if they’re a “friend of Dorothy” thigh The Wizard of Oz also counts as a throwback to the League of Their Own movie, because after he drunkenly kisses chaperone Miss Cuthbert (Pauline Brailsford), Jimmy Dugan callously remarks, “By the way, I loved you in The Wizard of Oz.” (We’re supposed to believe Jimmy mistook Miss Cuthbert for Margaret Hamiltonwho played the Wicked Witch of the West.) 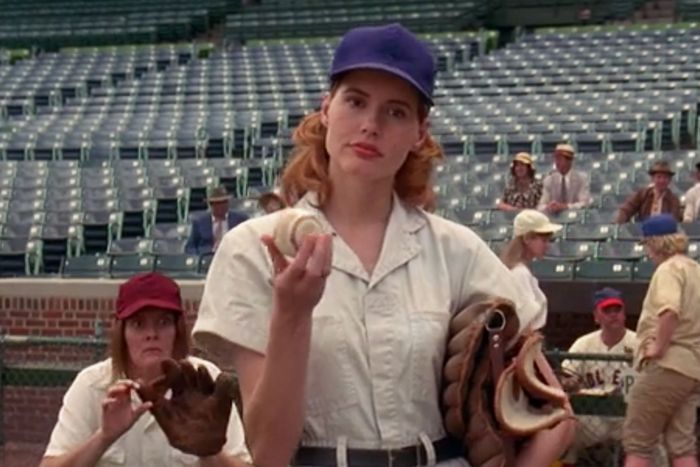 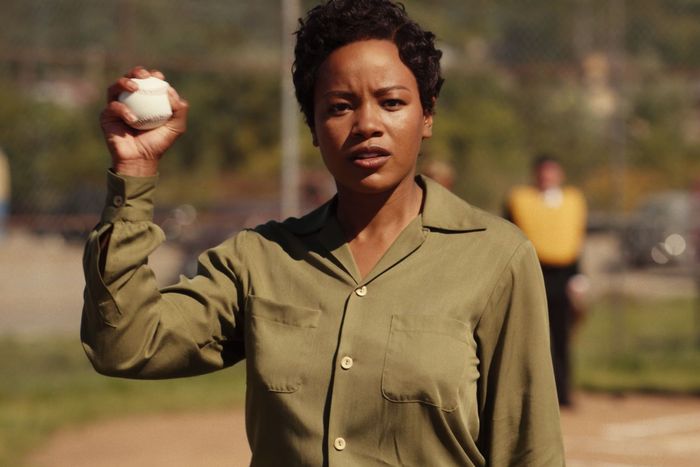 Movie reference: A Peach is traded

The characters are different and so are the circumstances, but when Jo is traded to the South Bend Blue Sox after her arrest (she was caught in the bar raid), it’s hard not to recall a similar plot point in the movie. Once the friction between Dottie and Kit becomes untenable, Kit is traded to the Racine Belles, and her fury toward her sister extends all the way to the World Series.

While Carson inherits many of Dottie’s characteristics from the film (they’re both catchers, etc.), there is one iconic Dottie moment that’s rightfully reserved for the best ballplayer in the series, Max Chapman. After spending most of the episodes ignored by the AAGPBL and the Rockford Tool and Screw baseball team (because, you know, racism and sexism), Max finally gets her time to shine as a substitute pitcher for Red Wright’s All-Stars, which she turns into a permanent spot. But not before single-handedly snatching a fastball clean out of the air. 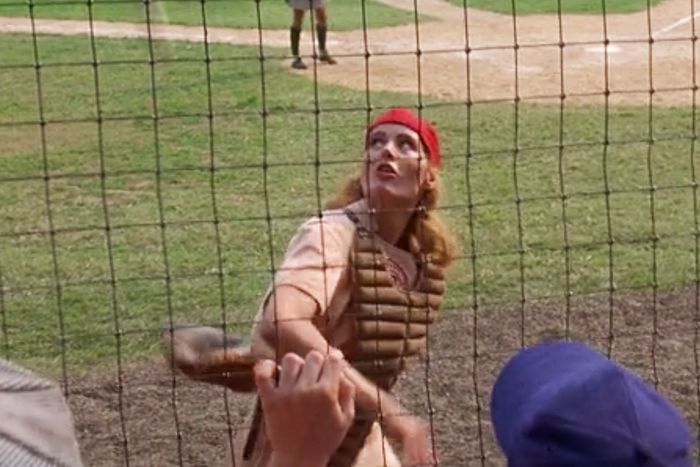 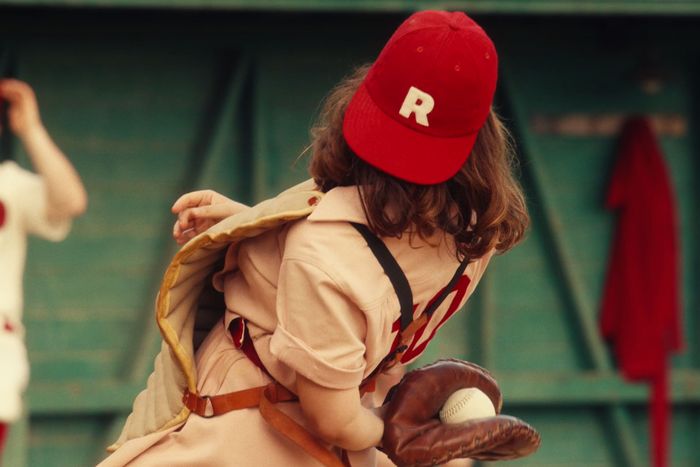 You know it brings a tear to your eye: the song the movie Peaches were singing right before Betty “Spaghetti” Horn received the devastating news her husband had been killed overseas. This time around, the TV-series Peaches sing the same “Victory Song” prior to their final game, but the moment is no less poignant. Fun fact: The “Victory Song” dates from the 1940s, written by two original AAGPBL players.

Carson Shaw may not be able to grab a fastball bare-handed or land a split, but there is one skill she shares with her movie predecessor: Both she and Dottie are quite adept at catching a pop fly behind their backs.

Click to rate this post!
[Total: 0 Average: 0]
Related Posts
Why be Spider-Man when you could be the Teenage Mutant Ninja Turtles?
Father of Highland Park parade taking pictures suspect charged with reckless conduct
Kardashian Children In 2022: The Next Generation
Leave a Comment