Adele spilled a few secrets behind the lyrics of some of her biggest hits in a new video for her Elle cover story.

The singer reflected on material ranging from her first album, “19” to her latest “30,” and started her “Life in Lyrics” episode by explaining how her “lyrics have probably changed a bit over time in terms of my vocabulary growing, considering that I started out when I was 19.”

“But, you know, they always tell about the same thing: me,” she explained, “and seemingly, my failed relationships. Which is crazy ’cause I actually don’t feel like that, but yeah.”

Adele kicks off the segment by reading a lyric from “Easy on Me,” admitting that she wrote some of the verses in the shower, and said the song made her think about how “lost I was when I left my marriage.”

“A lot of my friends throughout that rainy period of my life kept saying to me that, ‘You have to go easy on yourself, don’t beat yourself up too much about your decisions,’” ​​she continued. “It just really, really stuck with me that, like, I have to be kind to myself.”

When reading a lyric from “Chasing Pavements,” Adele critiqued her use of filler words as a young songwriter, saying, “I do remember that on 19, I always use the word ’cause.’ It’s so lazy. One time, I was in the studio with Sia, and I kept being, like, ’cause’ or ‘but’ and ‘and,’ and she was like, ‘We don’t do those words. We don’t do those words, we don’t use words like that. It’s just, like, lazy.’ But clearly, I’m lazy.”

Talking about “All I Ask,” she discussed what it was like to work with Bruno Mars on what she called “one of her favorite songs.” “[Bruno] made me do about 50 million takes of that song. Normally, everyone’s like ‘that was great, that was fine, that’s all you gotta do!’ but he made me do so many.”

In the cover story, Adele reveals she “went into hiding” after making the decision to cancel her Las Vegas residency just a day before its scheduled launch. Her residency has now been rescheduled to begin in November of this year.

Watch Adele’s “Life in Lyrics” below. 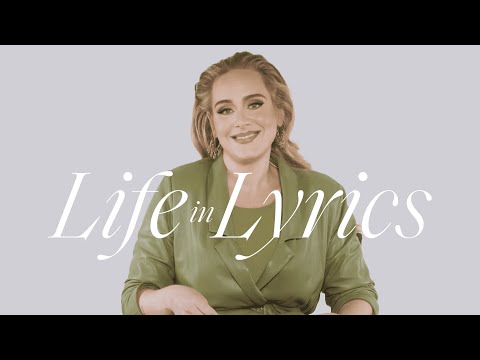