Who knew working with the “Fight Club” star would leave a Bad Pit in his hand?

During an interview with varietythe 32-year-old revealed a scene went wrong on set of “Bullet Train,” and fight despite a pretty nasty injury he suffered as a result, the actor tried to push through until production made him go the hospital.

“We were in a fight sequence and I get drop-kicked across the room. And the one sharp bit of the corner where there wasn’t any padding took a chunk out of my hand. I literally went wham, passed out,” the “Avengers: Age of Ultron” star admitted.

“Then I came back and was like ‘Should we go again?’ and they were like ‘No, no, no. You gotta go get stitches at the hospital.’ So then I spent the night in the hospital,” he said. The actor also blamed the loss of consciousness on low blood sugar due to a “crazy mad Keto diet” he had adopted to get “scrawny and lean” for the role.

Taylor-Johnson also said that when it comes to high-intensity action movies, injuries are the name of the game, “When you sign up for a David Leitch movie you know you gotta get a couple battle scars, some war wounds.”

“We all just came and had fun, you know,” he continued. “David Leitch gave us so much room to improv and ad-lib, and we really just wanted to make these characters pop. I mean, it’s such a heightened reality, the tone of this movie. [These characters] are so bombastic, so you wanna make them lifted and pop. So hopefully we’ve done that.” 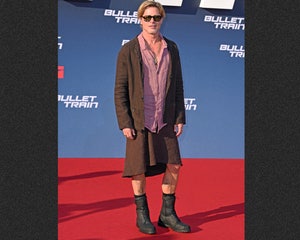 Brad Pitt on Wearing Skirt to Premiere: ‘We’re All Going to Die’

Click to rate this post!
[Total: 0 Average: 0]
Related Posts
You’ll quickly have the ability to play The Sims 4 free of charge
Watch Borat Want Kim Kardashian a Blissful Birthday as She Celebrates 42
Daily horoscope for July 23, 2022: The Sun is in Leo
Leave a Comment